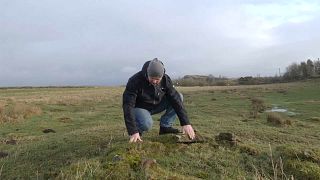 For almost two millennia, it has withstood man and beast. But, as it celebrates its 1,900th anniversary this year, archaeologists fear it may be facing its most dangerous foe: climate change.

Hadrian’s Wall, located in northern England, is a Roman fortification stretching from coast to coast. It served as a marker of the north-westerly frontier of the Roman Empire.

Archaeologist Bill Griffiths says it is a striking example of the longevity of structures built by the Romans.

"So Hadrian's Wall is an incredible monument, it runs right across England coast-to-coast 73 modern miles, 80 Roman miles long and you set that in context against other Roman marvels like the Colosseum, the Pantheon and things like that," he notes.

"Everyone knows it, everyone has heard of Hadrian's Wall - it is a real landmark."

Hadrian’s Wall and its surroundings have long been a rich area of discovery for archaeologists. Many artefacts and treasures have been pristinely preserved in the peat bogs that dominate the landscape.

But climate change has caused these peat bogs to shrink back and dry up.

A well, for example, was hidden underground 30 years ago, but the shrinking bog has left the well exposed in the open air, and vulnerable to complete destruction.

Archaeologists are all too aware that uncovering valuable Roman treasures from this site has become a race against time.

"So 1,900 years ago Hadrian's Wall was built to separate the country and to protect the Roman province of Britain, well quite frankly it's never been under as great a threat as it was then as it is now today through climate change," says Dr Andrew Birley.

So, while the world considers how climate change will affect our future, Hadrian's Wall shows the impact it is already having on our past.

France and Germany on the climate change frontline