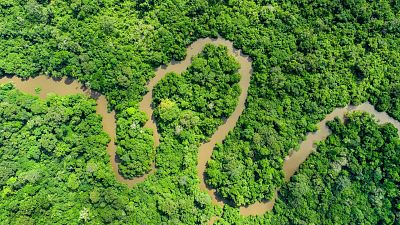 It may be the second-largest tropical rainforest on Earth, home to mountain gorillas, elephants and buffalo, but studies of the Congo Basin are few and far between. In fact, the last study of greenhouse gas exchanges in this unique green lung was done back in 1963.

Scientific research in the Democratic Republic of Congo - then known as Zaire - collapsed after President Mobutu took power in 1965. It is only now beginning to start up again, following his death in 1997. Conditions in the enormous country aren’t easy for scientific researchers either, as many areas lack basic infrastructure, making travel and access difficult.

“Africa is underrepresented in such climate gas measurements, and the Congo Basin is particularly poorly researched,” says ​​Matti Barthel, a research associate with ETH Zurich and the study’s lead author.

Until now researchers had assumed that the Congo Basin acted exactly like other large tropical forests. Based on climate modelling they believed it was just like the Amazon or the Indonesian.

These known methane sinks are also a major source of nitrous oxide - a greenhouse gas 300 times more potent than carbon dioxide - which lead scientists to assume that the Congo Basin would behave similarly.

But after years of collecting empirical evidence, scientists from ETH Zurich have discovered something quite unexpected. Far from being a sink for methane, the Congo Basin is actually a source of this greenhouse gas.

How does gas exchange in the Congo Basin work?

Researchers from ETH, lead by scientist Johan Six, demonstrated that although the mountain and lowland forests which make up the Basin are methane sinks, the swamp forests weren’t. It is this that tips the balance of greenhouse gases.

“Methane emissions there were exorbitant at times,” Barthel says.

Another surprise for the ETH researchers was that nitrous oxide emissions were also low when compared with previous modelling and other tropical forests.

“This was unexpected,” says Barthel. “Our measurements from both the first short measurement campaigns and subsequent long-​term studies didn’t confirm the model assumptions.”

The answer lies in the soil

In a bid to understand why the Congo Basin behaves differently to other rainforests, the researchers “looked into the soil,” says Six.

The team studied soil-based microorganisms in the region to see how they were behaving. As well as analysing the composition of the nitrogen present in the soil.

Their studies revealed that the soil microbes in the Basin convert nitrous oxide to gaseous nitrogen (N2) so that they can generate energy for their metabolisms.

This natural conversion process removes the potent greenhouse gas from the atmosphere, as gaseous nitrogen is completely harmless. Quite why this process works differently in the Congo Basin when compared to other tropical rainforests, requires more research, as Barthel explains.

“It was simply assumed that the Congo Basin’s biogeochemistry and the resulting soil gas fluxes are similar to other tropical forests. Given that this is not the case, together with being such an important ecosystem, our understanding of greenhouse gas fluxes can be much more refined.

What threats does the Congo Basin face?

Due to its vast forests and huge landmass - the DRC receives the biggest biodiversity conservation fund from the EU in Africa. The country is the same size as two thirds of Western Europe.

In recent years, parts of the forest have been put under community ownership. This means the people who live in the Congo Basin have the legal right to own and manage where they live. And there are signs that this is already starting to pay off by reducing the impact of deforestation.

“The forests of the Congo Basin are under extreme pressure for many reasons, of which charcoal production, dramatic increase in population, logging of precious timber, mining, and land-use conversion for agriculture (slash and burn) are probably the most important ones,” explains Barthel.

Six, Bathel and their team are now trying to investigate how agriculture can be practised more sustainably in the region to reduce pressure on the forest.

“Through sustainable agriculture the converted forest can be used longer without having to cut more and more forest patches. Of course there are also socio-economic factors (corruption, etc. ) which, if can be overcome, would help to protect these forests.”