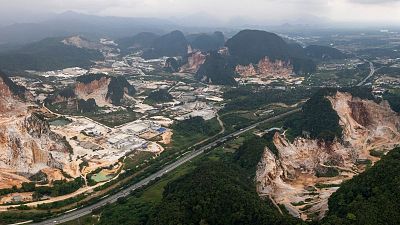 Food and wood products linked to deforestation will be banned from entering the EU under a major new law announced yesterday.

The proposal puts the onus on companies to prove that commodities like beef, cocoa and coffee were not made on land cleared or degraded since the start of 2021, and that their production did not break the origin country’s laws.

It comes days after COP26 where the Glasgow Leaders’ Declaration on Forest and Land Use committed more than 100 world leaders to reverse deforestation with a financial package for developing countries.

The summit drew attention to how vital forests are in the fight against climate change - and how counter-productive their current mistreatment is.

If deforestation were a country it would rank third in the world for CO2 emissions, much of which are driven by European imports. The EU market is also responsible for 16 per cent of global deforestation linked to international trade, according to WWF, so tighter legislation is essential.

Environmental campaigners are not so sure however, claiming it contains “serious gaps and loopholes”, particularly with regards to human rights and finance.

What does the new EU plan to curb deforestation entail?

There’s a clear mandate from consumers to stop the flow of deforestation-tainted products into the EU market, with more than a million people demanding a new law last year.

Crucially, this encompasses all deforestation - overriding varying national definitions of “legal” and “illegal” deforestation to create a single standard for sustainability.

To make supply chains more traceable, traders will have to pinpoint where a commodity was harvested and produced. And businesses must show that the risks of deforestation and forest degradation have been mitigated before a product enters the EU market - or face sanctions.

The European Commission has yet to announce when it hopes the draft law will be adopted.

Environmental groups agree that the EU plan is an important first step, but warn its impact could be limited by loopholes.

While the Commission “acknowledges” the role of Indigenous Peoples in protecting forests, it refers to their rights only under the need to abide by producer countries’ laws. In doing so, it misses an opportunity to promote international human rights standards, says Global Witness.

As part of a coalition of NGOs, it argues that operators should first seek the Free, Prior and Informed Consent (FPIC) of Indigenous Peoples and local communities who have a right to the land.

Global Witness had also urged the EC to cover financial institutions, after revealing that EU banks and investors have raked in €401 million in deforestation-linked revenues off the back of billions worth of deals with agribusiness companies.

Giulia Bondi, EU campaigner on forests at Global Witness, says “despite some good elements, the new proposed law isn’t ambitious enough and does not heed the calls from businesses, civil society and the public for robust rules to address the EU’s consumption and financing of forest-risk commodities.”

Greenpeace criticises the draft for not addressing the forest-felling behind other commodities such as rubber and maize, as well as pig and poultry farming. While Conservation International boss Herbert Lust says the EU must “extend protections to other ecosystems like savannas, peatlands and mangroves, each of which store tremendous carbon reserves akin to those of traditional forests.”