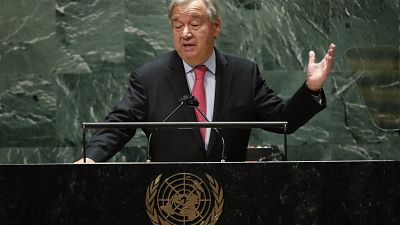 UN Secretary-General António Guterres stressed that the latest scientific report on climate change was "a thundering wake-up call" and "the climate crisis is a code red for humanity", just days before the COP26 climate summit in Glasgow.

The new report by the UN Environment Programme warns that plans submitted by 120 countries to cut greenhouse gas emissions fall woefully short of what is truly needed to avert global warming.

The head of the United Nations, speaking in New York on Tuesday, said a "leadership gap" is undermining the world's efforts to curb global warming, and that time is running out to meet the goals of the 2015 Paris accord.

"The time has passed for diplomatic niceties. If governments — especially G20 governments — do not stand up and lead this effort, we are headed for terrible human suffering. But all countries need to realise that the old, carbon-burning model of development is a death sentence for their economies and for our planet," Guterres expressed.

The plans submitted by the 120 countries run to 2030 and aim for a global temperature threshold of 1.5 degrees Celsius. Together, they aim to cut greenhouse gas emissions by 7.5%.

But scientists are warning that the plans are not strict enough to keep global warming from exceeding 1.5 degrees Celsius by the end of the century, and said 55% of cuts are needed.

The report concluded that recent announcements by dozens of countries including the US and the EU to aim for "net-zero" emissions by 2050 could, if fully implemented, limit a global temperature rise to 2.2 degrees Celsius.

Australia became the latest country to announce a net-zero target on Tuesday, but experts swiftly pointed out that it does not stack up.

These announcements could bring the target closer but the plans remain vague and short on details.

"Scientists are clear on the facts of climate change. Now leaders need to be just as clear in their actions," Guterres added.

UNEP's executive director Inger Andersen, whose agency is one of several to examine the gap between government pledges and the Paris goals, echoed the need for speed on curbing emissions.

Leaders, diplomats, scientists, and environmental activists will meet in Glasgow from October 31 to November 12 to discuss how countries and businesses can adjust their targets to avert the more extreme climate change scenarios that would result in a significant sea-level rise, more frequent wild weather and more droughts.

UN report reveals we are still on track for 'climate catastrophe'