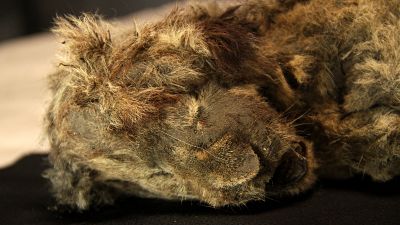 In early autumn 2018, seven metres below ground in a frozen tunnel deep in the Siberian Arctic, local mammoth tusk hunter Pavel Efimov made a shocking discovery.

As per a long-established working relationship, he contacted researchers at the Siberian branch of the Russian Academy of Sciences in Yakutsk. A team was duly dispatched to the site at Belaya Gora, on the bank of the Indigirka River.

What they found there was one of the most beautifully-preserved Ice Age animals ever found: a 28,000-year-old cave lion cub, curled up under the permafrost with its teeth, skin, claws and even whiskers still intact.

The cub, whom scientist Dr Valery Plotnikov and colleagues initially dubbed Spartak, was found just 15 metres away from another cave lion cub, Boris, that locals had discovered the previous year.

The pair were first thought to be siblings. But as the first major study to be published on the pair concluded this week, they lived more than 15,000 years apart; carbon dating put Boris at 43,448 years old. A CT scan and genetic tests also determined the younger of the two was female: hence her new name, Sparta.

Cave lions have been extinct for around 14,000 years. The team that later went to cover the excavation, which comprised top palaeontologists from Russia, Sweden, Japan, the US and the UK, could barely believe their eyes.

“It was absolutely stunning,” Love Dalén, a professor of evolutionary genetics at the Centre for Palaeogenetics in Stockholm, told Euronews. “You know you might find something, but this looked like it had died just two days ago.”

Parts of the permafrost had already melted around Sparta, he said, but nevertheless the team had to be “very careful” removing the specimen from the cave, cleaning away some of the mud before putting her on a stretcher.

The pair arrived in Yakutsk in November 2018 and January 2019 and were rigorously tested for infectious diseases, including anthrax, that can lie dormant for millennia before being scanned to investigate the condition of their bones and soft tissue.

The newly-published study found both cubs were just one to two months old when they died. There was no sign they had been killed by a predator, suggesting they might have fallen and become trapped, or been buried in a mudslide.

It also yielded some important clues about the evolution of the Eurasian cave lion. Both cubs’ golden coats were similar to those of today’s African lion cubs, but with a long, thick fur undercoat that could have insulated them from the cold.

Scientists also found their teeth had come through at an earlier age than would be expected of African lions today, suggesting that because of the harsher winters “cubs had to develop faster and be able to eat meat at a younger age”.

A full “autopsy” to examine discrete aspects like the contents of the cubs’ stomachs as well as full genetic sequencing may take place in future. For now, Prof. Dalén says, “This particular paper was a lot of fun. It was a great collaboration between scientists.”

Meteorite that crashed into English driveway goes on display at museum