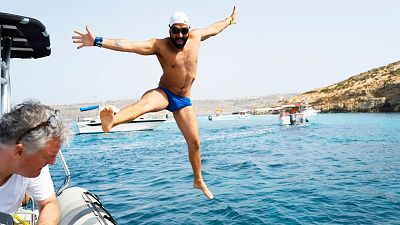 However, this isn’t any ordinary sporting feat as Agius is determined to use his platform to raise awareness of the plastics disaster in our oceans.

After facing a near-death experience while swimming at night due to a shopping bag, Agius has vowed to use his Olympic talents to raise awareness of plastic pollution.

“It was pitch dark and the experience was terrifying – I had no idea what was attacking me,” he says.

“After I got free and realised that it was not a sea creature but a discarded carrier bag which had almost ended my life, I felt called by the Mediterranean to devote my life to this issue – by being the first person to swim from Africa to Europe on this route.

“I feel I am making the next step in trying to end this defilement of our beautiful Mediterranean sea."

The European Commission estimates that more than 150 million tonnes of plastics have accumulated in the world's oceans, with a further 4.6-12.7 million tonnes added every year.

We need to act fast, as studies predict that plastic waste flow into the ocean could almost triple by 2040, which is equivalent to 50 kg of plastic for every metre of coastline worldwide.

In a staggering 50-hour swimming marathon, Agius swam 125Km from Linosa, Italy to Malta, with no stops, no sleep and no wetsuit. The whole swim was live-streamed to people around the world.

Before he took on the swim, previous record holder Chloë McCardle gave her a blessing.

“I really wish him the very best,” she told Times of Malta. However, she was still keen to hold her world record: “of course, until it is certified, I do remain the record holder”. But that record has now been overturned as Aguis is certified as a new world best, completing the 125 km distance in just over 50 hours.

Along for the swim was acclaimed director Jonathan Glynn-Smith, most famous for his work in capturing the 2012 London Olympics, and one of the most experienced under and over water film crews in the world.

Gregory Nasmyth, one of the UK’s leading environmental philanthropists was skippering one of the seven emergency vessels and has great hope for the footage they captured.

"Jonathan Glynn-Smith's film is going to be an inspiring and visually stunning record of one man's determination to keep swimming no matter what the ocean throws at him."

After setting off from Linosa in Italy on Monday 28th June, Aguis completed his swim on Tuesday evening, arriving into Gozo, Malta at around 10 pm to a crowd of cheering Maltese fans. Aguis has since taken to social media, expressing his immense gratitude for the support of the Maltese people and all those who followed in his journey.

Battling bad weather, injuries and mental challenges, Aguis successfully claimed the title in a feat of both human endurance and dedication to environmental activism.