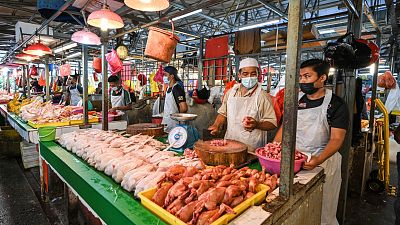 So-called ‘wet markets’ have been synonymous with the COVID-19 pandemic, ever since health officials predicted that the virus may have originated at one in the Chinese city of Wuhan.

Since then, this theory has been disproven, with most scientists now believing that the contact was a human-to-human superspreader incident at the market. But many of us are still left in the dark as to the types of wet markets that exist and what dangers they may pose.

Many governments around the world pushed for wet markets to be closed down in 2020. In April of that year, top US infectious disease specialist, Anthony Fauci, told Fox News that all wet markets should be "shut down right away."

As well as fears over human health, wet markets have also been called out for threatening biodiversity as some are believed to sell threatened and declining wild-animal species.

But new research suggests that it’s not that simple.

Scientists are now making distinctions between the types of markets that exist - and some are not as bad as others.

A recent study at Princeton University in the US claims that banning them outright may be a mistake, as most pose no threat to human health or biodiversity.

In fact, the widespread shutting down of wet markets could have the unintended consequence of disrupting critical food supply chains.

What are the different types of wet markets that exist?

Wet markets sell consumption-orientated, perishable goods in non-supermarket settings all over the world.

They are named after their frequently wet floors, as a result of regular washing to keep food stalls clean and the melting of ice to keep foods fresh. Some, but not all, also sell live animals.

It’s these latter two types that pose risks to both human health and biodiversity. The Princeton study suggests that policymakers target these more high-risk settings and distinguish between “benign” and “dangerous” markets.

For a large proportion of people in China and across Asia, they are just places to buy fresh food like chicken, pork and fish on the cheap.

The sale of this food provides important livelihoods to independent smallholder farmers. The set-up of the markets also enables them to transport animals without the involvement of large-scale food processing firms that control contracts with supermarkets. Farmers are more independent and make more money as a result.

Equally, a permanent shutdown of wet markets would affect patterns of food consumption. It would deprive Chinese consumers of a food sector that accounts for 30-59 per cent of their food supplies.

A ban ‘driven by misunderstanding’

"The usage of the term 'wet market' is laced with negative undertones, especially in light of COVID-19. I believe this is driven, in part, by a misunderstanding of what these markets actually are,” says study lead author Bing Lin.

Lin and his colleague David Wilcove researched wet markets around the world, considering factors like hygiene, size, density, and interspecies mixing. They also looked at the presence of live animals and whether markets were selling high disease-risk species too.

The researchers found that most wet markets are perfectly safe, with the majority only selling processed domesticated animals like poultry.

"Growing up in metropolitan Indonesia and amidst the hustle of inner-city Taiwan, I knew from experience that wet markets differed drastically in their composition and constitution," says Lin.

We need targeted, risk-adjusted policies to mitigate the highest market risks instead of “sweeping but ineffectual short-term change,” he says, which could stimulate xenophobia, racism, and anti-Asian sentiment.

Researchers hope that future research will continue to quantify the risk factors these markets pose, so decision-makers can better safeguard both human health and biodiversity.