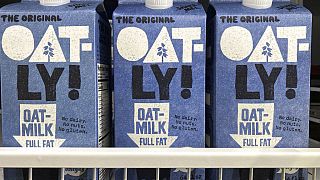 This week, the EU officially withdrew Amendment 171 from the table - a bill that would have banned plant-free dairy companies from using words like “buttery” or “creamy” to describe their products.

The move comes several months after the European Commission initially voted in favour of the amendment which would have had drastic implications for companies manufacturing plant-based alternatives.

Among the restrictions, brands like Oatly or Alpro would have been prohibited from comparing their products to their dairy counterparts. Even scientifically supported claims such as “half the carbon emissions of dairy butter” would not have been allowed to appear on packaging.

Goods would not be able to sport packaging that evoked dairy-like images or use mediums reminiscent of traditional dairy products such as milk cartons or blocks of butter. The amendment went so far as to restrict the inclusion of certain kinds of health information, such as “does not contain milk” or “lactose-free milk alternative”.

Regulations on dairy-free alternatives are already restrictive. Legislation passed in 2013, means words like “cheese,” “yoghurt,” can only be used to describe milk-based products which must originate from animals.

#PlantbasedWinAlert! EU Parliament has rejected the dairy lobby's Amendment 171, which would have imposed heavy new restrictions on plant-based dairy products. The #plantbased foods industry should be allowed to communicate honestly & openly to consumers. https://t.co/kYVJT5pGJMpic.twitter.com/PKlgISESMt

Who wanted to overturn it?

The new bill was heavily criticised by plant-based food producers as well as environmental advocacy groups.

Consumers weren’t happy about the proposed legislation either. Almost half a million people signed a public petition to overturn Amendment 171, according to Food Navigator.

The movement was led by ProVeg, an international advocacy organisation aiming to promote healthy eating and a reduction in animal consumption. More than 100 organisations signed its letter opposing the amendment, including Greenpeace and the World Wildlife Fund (WWF).

On Wednesday, ProVeg released a statement celebrating their win:

“In a victory for common sense, the plant-based community, and the future of the planet, the EU’s proposed ‘plant-based dairy censorship’ has been defeated.”

Giants in the plant-based food industry have been vocal about the bill from the beginning.

Oatly’s “are you stupid?” campaign, interrogated milk lobbyists’ argument that the public can’t tell the difference between their products and animal-based ones.

The milk lobby seems to think that people can’t tell the difference between products labeled ”dairy free” and … dairy. Wait, what? We decided to find out if the Europeans really are that stupid. Sign the petition at https://t.co/zGzazgLb4o. #StopPlantbasedCensorship#StopAM171pic.twitter.com/tUJiJS6SMP

Alpro has also spoken up about the issue. General Manager Sue Garfitt released a statement in February 2021 asking for Amendment 171 to be dropped.

“I am convinced that policymakers too are beginning to recognize the importance and urgency of shifting the food system in a more sustainable direction, working with nature rather than against it,” she said.

“That is why we are asking the EU Trilogue to stand by the position of the Commission and reject Amendment 171 because current legal framework is sufficient when enforced."

This fight is not unique to the dairy industry

In 2020, a stakeholder push to ban vegetarian-alternative producers from using terms like “burger” led to a vote in the EU.

“We need to make a difference between the products, and meat is certainly different in its nutritional value than the meat replacements,” said Pekka Penson, Secretary-General of the European farmer representation group Copa-Cogeca at the time.

The EU voted against the bill, affirming meat alternative producers’ right to use words like “sausage” and “burger” in their branding.

Member states have raised their own beef with vegetarians, however.

France has implemented a ban on the word burger to describe meat-free equivalents, leading vegetarian activists to take their fight to the EU last year.