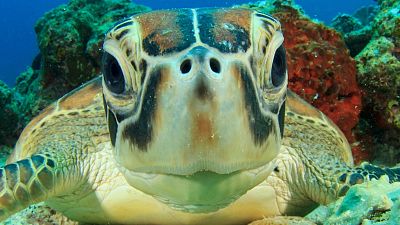 An alarming amount of toxic chemicals have been found in the waters of the Great Barrier Reef. So much so that sea turtle populations are becoming sick.

What studies have already shown, now wildlife workers can confirm. Poisoning substances such as paint, adhesives, antibiotics and thousands of other chemicals are causing serious harm to our marine life.

Founder of the Cairns Turtle Rehabilitation Centre in Australia, Jennie Gilbert, says many of her patients come from the Great Barrier Reef.

"We're seeing an increase in a lot more animals that are really sick," she says.

Researchers are calling for an investigation

A recent report by the World Wide Fund for Nature (WWF) and Griffith University has called for greater monitoring of pollutants on the reef. Marine ecologists had previously found heart and kidney medication, anti-fouling paint and sealant in the blood of more than a thousand coastal green turtles.

Altogether, the turtles had 4,000 different chemical compounds in their body.

Griffith University’s Dr Jason van de Merwe, a marine ecologist and ecotoxicologist, says that the most alarming elements are the substances which can't be identified.

"It is vital the public is made aware of the potential health risks associated with chemical contamination of marine habitats and seafood."

Although there are more than 40,000 chemicals that are of concern, the Great Barrier Reef water quality is monitored for only 40, such as nutrients and pesticides, mostly coming from agriculture.

"We'd like to see that extended to include pharmaceuticals, heavy metals, other chemicals that we know are now accumulating," says Dr Van De Merwe. These chemicals can also degrade to form new compounds more toxic than the original chemicals. "We know very little about the toxicity of these chemicals on their own and about how harmful they are when they mix together,” he adds.

Click on the video above to learn more about the impact of chemicals on marine life.