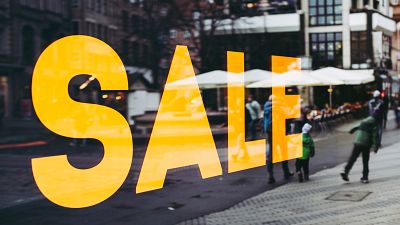 Black Friday, one of the largest shopping days in the world, kicks off again tomorrow - but the promotional sales period is not without controversy. Environmentalists and workers’ rights activists have long been campaigning against the frenetic weekend of high-pressured purchases.

Beginning in the 1950s, the day after American Thanksgiving has been a staple of the retail world for more than half a century. In more recent years, the following Monday - dubbed Cyber Monday - has taken off too, with tech ecommerce retailers jumping on the commercialised bandwagon.

Although Black Friday may have started as a traditionally American phenomenon, over the last decade or so it has become a truly global event. In 2017, the 24-hour period alone overtook the whole month of December’s UK sales for the first time - a trend we have since seen repeated year on year.

It’s estimated that Brits will spend around €7 billion this year on Black Friday and Cyber Monday, a 20 per cent decline from last year thanks to the financial impact of the COVID-19 pandemic. Before the coronavirus crisis, however, the UK was predicted to spend almost €9.5 billion during the promotional period.

But inevitably, with this day of retail-based over-consumption comes a whole lot of waste, carbon emissions, and general environmental damage. Around 80 per cent of items bought over Black Friday and the weekend that follows, along with their (often plastic) packaging, end up in landfill or being incinerated, according to think-tank Green Alliance.

Last year climate activists protested against the shopping day, with blockades positioned outside Amazon warehouses in Paris and sit-ins staged across other major cities. Organisations like Fashion Revolution have launched a campaign again this year, asking individuals to “take a stand against mindless consumption”, and choose not to engage with the “environmental and social damage of hyper-discount culture” of Black Friday.

For 2020, however, we were interested in the companies who are forgoing this major sales event entirely, urging their customers to consider the human and planetary impact of Black Friday.

Why are some retailers ditching Black Friday altogether?

While ecommerce giants and major fast fashion brands jump wholeheartedly into the promotional campaign, there are increasing numbers of independent retailers and companies who are actively rejecting the entire notion of Black Friday.

“We feel that taking part in it would devalue the preciousness of our rings,” explains Claire Roberts who co-founded ethical jewellery brand The Vintage Ring Company. Roberts describes her company as “the antithesis of the ‘buy, buy, buy’ mentality” which is central to Black Friday.

“We would never encourage anyone to purchase something from us just because we have been pressured into slashing prices. The whole point of our company is that we are choosing one-off pieces, renewing and redesigning them, and offering them to a customer who wants something that no one else has.

“Giving a discount ‘just because’, is the complete opposite of what we believe in,” Roberts adds.

Other jewellery brands are choosing to boycott the sales period for similar reasons, wanting customers to make thoughtful purchases instead of being swept up in the energy and pressure of the sales.

“Black Friday undoubtedly fuels overconsumption,” explains Marilyne Kekeli, founder of MAMATER, “it would go against my ethos to participate in the Black Friday sales.”

Kekeli has learned from her own Black Friday experiences as a consumer, where she has felt pressured into making purchases she still regrets.

“I personally am still using soaps I bought a few years ago at a Black Friday sale,” she says, “I no longer like them, but I feel a duty to use them to avoid throwing them away - how sad is that?”

As a result, Kekeli wants her customers to enjoy her products, shopping more slowly and mindfully. “If that means that I may miss out on some sales,” she adds, “I am comfortable with that.”

Not every brand saying no to Black Friday is fundamentally against sales, however. Leora Moreno is the founder of Leo With Love, and decided to run a lockdown promotion earlier this year. Customers could buy a piece of jewellery for themselves and for a friend, in order “to show loved ones they were thinking about them.”

But Moreno feels that Black Friday is too impersonal for independent retailers and ethical shopping.

“I’m boycotting Black Friday this year because it’s not in the spirit of supporting small business,” she explains, “but it’s more than just about supporting the local economy.

“Because we’re distanced from people we care about, the gift you choose becomes a conversation and shows you thought more about what someone means; not just that it was part of a Lightning Deal from a factory that mass produces products.”

There are also companies who are looking to switch things up this year, not by boycotting Black Friday, but by rebranding the entire period.

Fashion brand birdsong produces ethical clothes, sustainably made, while guaranteeing the women who make the products a fair, living wage. This weekend the company has conceptualised ‘Transparent Friday’, where customers can choose whether to use a discount code, pay full price, or even add a tip for the workers who produce the garments.

Birdsong’s team has released data showing exactly how the costs breakdown for their clothes, from labour to fabric costs, along with the CEO’s salary (€28,000).

“We hate Black Friday,” explains birdsong’s website, “we feel like it devalues the hard work and thought that goes into each and every garment put on planet earth.”

But birdsong isn't the only organisation looking to reinvent Black Friday this year. Ethical jeweller Lebrusan Studio has decided to use the sales frenzy to raise funds for NGO The Water Project. From each sale over this weekend, 20 per cent of proceeds will go towards establishing clean water sources in rural communities across Kenya, Sierra Leone, and Uganda.

As we all begin to slow down and reassess our lifestyles and priorities in the wake of this year’s pandemic, perhaps 2020 is also a chance to break with tradition and reconsider whether Black Friday is something we need or just something we think we need.