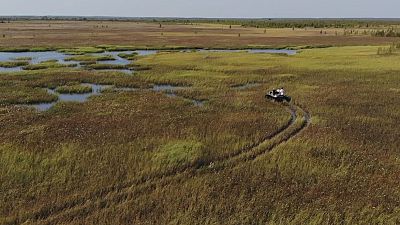 Dried-up lakes are one of the most visible signs that the permafrost is breaking-up in western Siberia   -   Copyright  Wilks, Jeremy/   -
By Jeremy Wilks  & Galina Polonskaya  •  Updated: 15/10/2020

In western Siberia the permafrost is sinking, the temperatures are rising, and the landscape is changing fast. What does that really look like on the ground? We have a special report from the far north of Russia in this month's edition of Climate Now.

To begin, the headline data from the Copernicus Climate Change Service reveals that globally July 2020 was the third warmest on record, behind July 2016 and 2019, with temperatures 0.5 degrees Celsius above the 1981-2010 average.

While July may have been a mixed month across Europe - warmer than average in Portugal and Spain, cooler than average in the UK and Scandinavia - it was clearly much warmer in the Arctic region. The map of temperature anomaly for the pole reveals a large red and pinkish area stretching along the northern coast of Siberia.

Looking at that same area with the map of sea ice concentration anomaly confirms the warming trend. The areas in red had significantly less sea ice cover than would be expected for July, and in many cases there was open water, as the ice had melted away.

What changes are visible in Siberia?

To witness the reality of the effects of climate change in the far north we sent Euronews' Moscow correspondent Galina Polonskaya to meet a science team at the Khanymey station in Yamalo-Nenets Autonomous Okrug, a sparsely populated region of western Siberia.

The team, led by scientist Sergey Loiko, carry out regular field trips to the area to observe the evolution of the landscape. There are many complex processes underway in the Arctic and Siberia as the planet warms, and this year in particular they wanted to see how the springtime heatwave had impacted the region.

Their first measurement reveals the extent of the changes underway. Loiko digs down into the mossy earth to find the top layer of the multi-annual permafrost further down than expected.

"So instead of a normal 40 centimetres, we see here about 55 centimetres. Normally this depth of the active layer can be seen at the end of summer, or in the middle of September. So the permafrost has gone about one month deeper. And in autumn it would sink much deeper," he says.

The active layer is the top part of the soil which freezes and thaws with the changing of the seasons. In some permafrost areas it is just a few centimetres thick, and in others it can be metres deep.

In general, Loiko says that they are observing a clear signal from the environment: "Our research at this key area and other areas show that the climate is getting warmer, the ecosystems are reacting, and they are reacting differently. If you look at everything that's related to the stability of the soils we see that they become less stable. We see lakes drying up, and active peat accumulation starting."

The peat accumulation this team has observed in some areas of western Siberia is a rare piece of good news for the environment, as peat is a long-term sink of carbon, trapping CO2 that would be released into the atmosphere. However the positive effect is dwarfed by the negative impact of the methane and CO2 released as bacteria become active in the warmer, thawed permafrost layer.

Lakes drain away as the climate warms

One of the most visible manifestations of climate change in this part of Siberia is the disappearance of lakes, which previously had sat above the permafrost layer, but which are now draining away.

Sergei Loiko takes us to a marshland area which was home to a lake over 1 square kilometre in size just 15 years ago. The reason for the lakes draining away is that the permafrost layer is sinking lower and breaking up, and milder winters are changing the dynamics of the local environment.

"Winters are warm during the climate warming phase. Since they're warm, they're also more snowy, as a rule," explains Loiko.

"The soil and the stream bed which are under the snow do not have time to freeze properly, and so when a large mass of melt water accumulates and begins to press down, first it removes the snow, and as the soil is melted it gets pushed out the way like with a bulldozer, and the water course is cleaned out. As the water course is cleared and the banks are destroyed the lake starts to sink and disappear."

Another consequence of climate change that the Tomsk team has observed is that the tree-line is advancing northwards. The forest creeps towards the Arctic as the permafrost layer sinks lower, leaving fertile soil behind.

"Here we can see the young trees - this one sprouted in 2005, and looks really well, and you can see how these trees are moving onto the marshes," says Loiko.

Why is Siberia and the Arctic region warming so quickly?

This vast region is warming faster than other parts of the planet because of what are called 'positive feedback loops'. One example is if the snow melts earlier then it exposes darker land beneath, which absorbs more sunlight, and warms up even further.

There are other feedback effects, too, as Sergey Loiko explains:

Such feedback loops appear to be accelerating the process of change in this vast region of Russia, with the heatwaves of recent years meaning the permafrost which has kept this landscape relatively stable for thousands of years now sinking lower, breaking up, and disappearing.