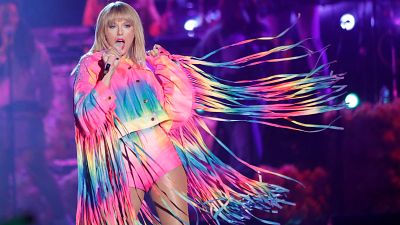 Move over Madonna, Taylor Swift is arguably the new Queen of Pop. A worldwide superstar, she is the first artist to have four albums sell over one million copies within the first week, and boasts a huge fan base including nearly 120 million followers on Instagram. Impressively, the American singer-songwriter is one of just five artists to have reached over 1 billion views on a single music video on Youtube (‘Look what you made me do’) and is setting her sights just as high with her upcoming album Lover.

The star has announced that her new album, to be released on August 23rd, will also mark the start of a collaboration with British designer Stella McCartney, whom Swift counts as a friend. The album, Lover, will go hand in hand with the launch of a new fashion collection with the sustainable fashion designer who the singer publicly advocates, by wearing her designs to events and awards ceremonies.

How did she announce it?

Having dropped hints for the last few months that something exciting was in the mix, Taylor Swift took to Instagram to announce the launch of her new clothing collection. During a 10 minute Instagram Live, the 29 year old excitedly spilled the beans to her fans, saying:

"For the release of the Lover album there's gonna be a collaboration that I've done with Stella McCartney. She's been a friend for a really long time and also just a woman that I respect so much. I respect what she creates, how she creates it."

"There's so much whimsy and imagination and romance to the clothing that she designs and I've worn a lot of her stuff recently. She's heard the new album and this new collaboration is inspired by the Lover album."

What will the Taylor Swift x Stella McCartney collection be like?

Although few details have been revealed, our guess is that the collection will be colourful, as Swift has been rocking rainbow colours of late, in celebration of Pride month. At a recent performance, she appeared in a neon, tie-dye two set, wearing Stella McCartney rainbow trainers, which retail at £489.

Her Instagram aesthetic has also been noticeably bright and pastel-themed, which may give us clues as to the design of her upcoming collection, as well as how it will be styled.

Most importantly, the new collection will be sustainable, as Stella McCartney is known as a trailblazer within the ethical fashion industry. McCartney’s designs are cruelty-free and environmentally friendly, exclusively using organic cotton, sustainable viscose forest fibres, regenerated and recycled cashmere in all her collections. Stella McCartney even powers her offices and shops using green energy.

We’re optimistic about the collaboration, as it will give Taylor Swift’s younger fan base a chance to learn more about sustainable fashion and in turn be conscious of the clothes they are buying.