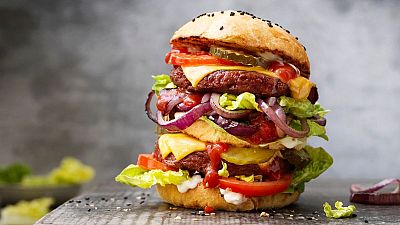 Meat-free has exploded over the past few years. Across Europe, plant-based alternatives to meat are flying off shelves faster than ever before, as eco-conscious shoppers take note of how the contents of their basket could impact the environment.

A host of vegan burgers that look and taste like meat have launched into supermarkets across Europe. They use less land and less water than their meaty equivalents and produce fewer greenhouse gases. Some even ooze a red juice, like a rare beef burger when cooked, despite being completely meat-free.

So, what actually goes into your veggie burger?

The Beyond Burger is made in the US with Canadian yellow peas making up the base. Its recipe has been such a success that celebrities including Bill Gates and Leonardo DiCaprio have clamoured to invest in the business, which has plans to launch its burger in 50 countries.

If you’re in one of the countries where the Beyond Burger is already on sale, you will usually find it in the meat aisle, next to meat burgers, making it an easy swap for flexitarians.

Made with Quorn’s signature Mycoprotein – a high protein, high fibre, low fat fermented fungus – the Ultimate Burger also contains a hint of beetroot to give it a meat-like pink hue.

The thick-cut quarter pounders have just gone on sale ahead of summer, giving vegetarians, vegans and those cutting down their meat consumption more choice come barbecue season.

The Moving Mountains burger is only available in restaurants for the moment. Packed with plant-based proteins and mushrooms that create a succulent texture akin to meat, it’s also loaded with herbs and spices for a punch of flavour.

The beetroot juice centre keeps the burger succulent, while allowing it to ‘bleed’ for a meaty illusion.

Vivera aimed to make its burger as much like an Aberdeen Angus beef burger as possible, with a sizzling exterior while remaining tender in the middle – enough to fool meat lovers.

So far, this “breakthrough” burger is just available in the UK, and is yet to join the rest of the Vivera range, like its plant-based steak, in the Netherlands. Nutritionally, the burger is high in protein and is a source of fibre, iron and vitamin B12.

The brand says switching from hamburgers to its Meatless Farm burgers would save the equivalent of a long shower in water and reduce your carbon footprint by that of a long drive.

Its patties are packed with ingredients designed to keep them succulent while cooking, and just begging for a slice of pickle and some relish to turn them into a quick dinner.

Nestle’s Incredible Burger doesn’t compromise on “flavour, texture or cooking experience”, according to the head of its food business. And he must be on to something, because in Germany it’s even used to make McDonalds’ new Big Vegan TS burger.

Launched last month, the Incredible Burger will join the Garden Gourmet range across Europe in a bid to help make healthy and sustainable food choices accessible to all.