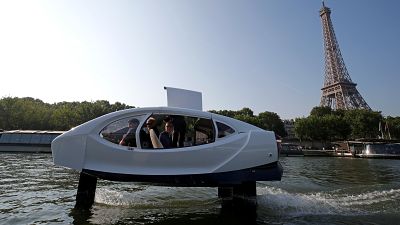 Clean water transport may put an end to traffic jams in major cities around the world. This motivated the French yachtsman Alain Thebault, who turned a boat design he used to break a world speed sailing record in 2009 into a clean, fast taxi service for the waterways.

He calls the proposed service SeaBubbles and its flying taxis 'Bubbles'.

According to the website, the vehicle is 100% electric and autonomous during its rides and is charging while people are getting in and out.

The docks create energy using the power of the water, the sun and the wind.

When reaching 12 km/h (7.5 mph), the Bubble starts flying above the water.

Just like Uber, it works via a mobile application.

The prototype zoomed across the River Seine in Paris ahead of the VivaTech conference where they hope to sell their first models.

Emmanuel Macron, France's pro-business president who wants to create a "startup nation", even championed the idea when he was finance minister.