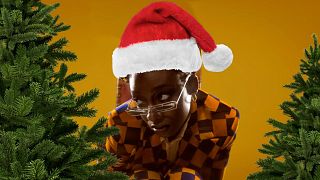 Day 4 of our Cultural Advent Calendar, in which we count down our highlights of 2022 day-by-day all the way to Christmas and beyond. The first seven days are our musical favourites of the year. Today: Little Simz.

It would be a crime against culture to be writing about music in 2022 without mentioning the brilliant Little Simz.

Although her latest project came out in September 2021 and has already received wide acclaim, she has had an extraordinary, career defining year.

This year alone she headlined Glastonbury’s West Holts stage, won the Brit Award for Best New Artist, picked up both a Bazaar Women of the Year award and the coveted Mercury Prize, and jointly won the album of the year prize at the 25th MOBO awards.

If you’re not already aware, Simbiatu Ajikawo, known by her stage name Little Simz, is a 28-year-old London-born rapper and actress who has cemented herself as one of the UK’s brightest talents.

For a taste of her music, look no further than her most recent project and fourth studio album, Sometimes I Might Be Introvert, a cinematic and funky hip-hop exploration of her life and experiences.

With ingenious lyricism, sharp flows and exceptional storytelling, Simz explores themes of systemic racism, family dynamics, womanhood and introversion, all in the space of just over an hour.

I've listened to the 19 track album (produced by Simz’s long-time friend and collaborator Inflo) more times than I could count, and each time I discover something new and interesting that makes me fall in love with it even more.

It’s an extremely diverse and expansive work - from the orchestrally epic opening track 'Introvert', to the Smokey Robinson soul sampling bliss of 'Two Worlds Apart' - the instrumentals act as the perfect backing for Simz's commanding voice.

She also explores her Nigerian heritage in the headbopping Afrobeat track 'Point and Kill', a duet with London-based Nigerian singer Obongjayar, followed by the wonderfully vibrant 'Fear No Man', which was selected for FIFA 22’s official soundtrack.

A standout track on the project is 'Woman', featuring the dreamy vocals of British singer-songwriter Cleo Sol. The song is a celebration of women, specifically Black women, and the influence they have on society and culture around the world.

"Ain't nothin' without a woman, no / Woman to woman, I just wanna see you glow," raps Simz in the pre-chorus.

I’ve been lucky to see her perform twice in the past year - first at London Brixton’s O2 Academy and a second time at Forwards Festival in Bristol. Each time I was equally blown away by her stage presence and effortless swagger.

With a live band, sit-down interludes and spoken word sections, she truly expressed herself in each performance I saw and even made her way through the crowd in Bristol to rave amongst her adoring fans to the banger that is '101 FM' (from her 2019 album 'GREY Area').

Her work has without a doubt been one of the biggest cultural highlights of my year.

So if you're reading this and you have not already listened to her music, what are you waiting for? This recommendation is my Christmas gift to you.