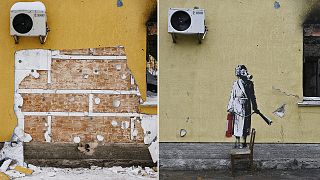 A split-image rendition of the Banksy stencil in Hostomel, before and after the attempted theft in December 2022   -   Copyright  AFP/Euronews
By Euronews  with AFP  •  Updated: 05/12/2022

Ukrainian police prevented a group of thieves from stealing a stencil by the renowned British street artist Banksy in Hostomel near Kyiv on Friday, according to local authorities.

"They cut out the artwork (made) on the wall of a building destroyed by the Russians," the governor of the Kyiv region, Oleksiy Kuleba, said in a statement on Telegram.

His post on social networks was accompanied by a photo showing the damage done to a part of a building's facade, painted orange.

The wall featured a stencil of a person wearing a gas mask and standing on a chair.

According to Kuleba, "several people were arrested at the scene" by Ukrainian police, while "the drawing is in good condition and is in the hands of law enforcement."

The head of the Kyiv region's police, Andrii Nebytov, said in a separate statement that "eight people have been identified".

"All are between 27 and 60 years old. They are residents of Kyiv and Cherkasy," he said on Telegram, adding that "a preliminary investigation into property damage has been opened."

A number of stencil drawings in Banksy's inimitable style appeared in and around Kyiv in early November.

Banksy then posted a video on his Instagram account showcasing his works in Ukraine -- including the one in Hostomel -- confirming that he was the author.

"Banksy's works in the Kyiv region are under police protection," Kuleba said in his statement.

This is not the first time someone attempted to steal his work.

In June, eight men were convicted in Paris for stealing a Banksy artwork that paid tribute to the victims of the 2015 Bataclan terrorist attack.

The suspects were found guilty of theft and handed prison sentences ranging from six months suspended to two years in prison.

The group removed the door of the Bataclan concert hall featuring the artwork in January 2019 and transported it to Italy.

The artwork was later recovered by Italian authorities from an attic of a farmhouse in June 2020 and returned to France.