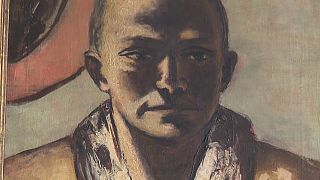 A self-portrait by expressionist artist Max Beckmann smashed the record price for a painting sold at auction in Berlin, Germany.

As the hammer came down, the highest bid for Beckmann's "Selbstbildnis gelb-rosa" (Self-Portrait Yellow-Pink), painted during the Second World War in 1943 stood at €20 million. However, with additional costs, the final total for the buyer will come to around €23.3 million.

The painting shows Beckmann as a young man with an enigmatic smile.

Beckmann painted the work while in exile in Amsterdam. When the Nazis came to power, he was among the artists whose work was classified as "degenerate art" and had many of his paintings seized from German museums.

He gifted the painting to his wife, Mathilde Kaulbach, who kept it until her death in 1986.

Would you buy this painting by King Charles III?