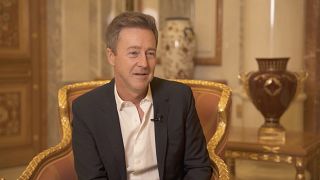 Hollywood actor Edward Norton has filmed movies all over the world, but he’s one high-flyer you won’t catch on a private jet.

Speaking at the World Travel and Tourism Council Global Summit (WTTC) on Tuesday, Norton called for more action on climate change and spoke about the battle facing the next generation.

“Making films is storytelling, obviously…I also think in some sense, we need to tell a better story about what's going on in the world and why we all need to get involved,” the ‘Fight Club’ star says.

Norton, a United Nations Global Ambassador, joined global tourism leaders from 185 countries in Riyadh for the 22nd WTTC summit, sharing thoughts about the future of the sector and the challenges that should be addressed.

The Golden Globe winner spoke to Euronews about growing up in a family of conservation advocates and how he became steadily more involved in sustainability as he travelled the world for acting roles.

"The privilege of an artistic life and career is that it sort of ebbs and flows with my own inspiration," he says.

"But it leaves me with a lot of time to focus on other things that I've always been interested in. Our human industrial activity needs to shift to more complicated issues. It's not just preserving wildlife, it's a climate shift. And it's the sustainability of our industries."

‘Yesterday’s commitments to sustainability are not enough’

His comments came the day after the release of WTTC’s report into the rise of sustainable travel, which found that the industry’s gross domestic product grew on average by 4.3 per cent annually, and its environmental footprint only increased by 2.4 per cent.

Despite recent improvements, Norton compared the fight against climate change to the previous generation’s “World War Two” and encouraged the industry to do more.

“Yesterday’s commitments to sustainability are not enough,” the actor says.

“With each passing year, we understand more and more what the nature of the crisis around carbon is, around water shortage, around biodiversity

“The short message is we've got to go much further, much faster.”

Sentiments shared by Radisson Hotel Group CEO, Federico González, who called for hotels to be held accountable for their environmental impact.

“One of the basic elements we need to put in every hotel in the world is to be able to measure water consumption and carbon footprint,” says González.

“Once you measure them, then you need to have a plan to reduce it, but if you ask hotels around the world about their carbon footprint today, they will not know”.

One of his tips is to remove single-use plastics from hotels all around the world.

“These are really concrete examples of behaviours that we are going to start implementing that will have a significant impact now,” he says.

Equally significant to the environmental issues are the social and ethical responsibilities of the industry, González believes.

“I think hospitality jobs are demanding,” he says. You have to work [long] hours and without a lot of flexibility. But I think we need to bring the hope of development, of a career plan, more training and enable people to grow into their lives.

“I think we need to compensate [for] both short term and long term.”

The future of tourism in Europe

Much of the summit was dominated by Saudi’s impressive Vision 2030 efforts, a government-backed framework to diversify its economy from oil, encourage climate-friendly choices and develop public service sectors.

Such initiatives include Neom, the smart city that’s being developed, the lRed Sea Development, a land and property megaproject and the cultural project in the city of AlUla.

This week, Diriyah Gate was in the spotlight after announcing the opening of 16 luxury hotel brands at the €48 billion site, bringing the total number of confirmed hotels to 32.

“Diriyah is the birthplace of the kingdom,” says CEO of Diriyah Gate Development Authority, Jerry Inzerillo., “So, everybody is going to want to see where the Arabian Peninsula once stood.

“The new Riyadh is going to be a 15 million metroplex. This is the jewel in the middle.”

According to MEP José Ramón Bauzà, Europe can learn a lot from the Middle East’s decisive tourism tactics.

“You can see that here in Saudi and the whole region, the Middle East countries that they know what they want to do,” he says.

“[In Europe], we're stuck thinking, even though we have a very high knowledge. Here they know what they want to do and they're going further at a very high speed.”

For Bauzà, the main difficulty in achieving cohesion in Europe’s tourism strategy is finding consistency across Europe as a whole.

“We have 27 different member states, each of us as different, but we need to think as a whole,” he says.

“That’s a political need and you want to do that, but sadly from the European perceptive, they think that tourism is granted that it’s something we have everywhere at every time.”

Now, Bauzà is calling for a more derisive approach if Europe’s tourism industry is to recover from the COVID-19 pandemic financially.

“Things are getting better. Obviously, we are getting up from the pandemic, but we don't know what can happen in the next hour.

“We have to have a very specific and detailed strategy in tourism, and if we don't do that, it is a threat that we cannot afford by ourselves” Bauzà says.