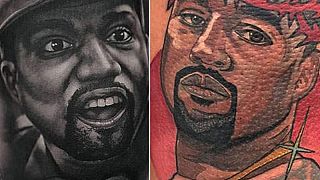 Who hasn’t had a tattoo regret, one of those times when you look at your ink and are reminded of a hasty choice that hasn’t aged well?

And what if you brazenly decided to get one of your favourite artists tatted as a tribute, and that particular person happens to have a very public and potentially triggering meltdown that only inspires feelings of shame and embarrassment?

Thank the tattoo gods for London’s NAAMA Studios, a tattoo removal sudio who are not Heartless, who will make you Stronger, and who proudly say that you’re not Bound 2 your Kanye West tattoo.

Indeed, NAAMA Studios offers to remove all Kanye ‘Ye’ West tattoos free of charge, following the recent controversies surrounding the rapper, including anti-Semitic comments and the fact that he apparently was in the habit of sharing nude pics of his ex-wife Kim Kardashian to Adidas staffers. Charming.

NAAMA Studios advertised this service on Twitter with the line: “Got a #kanyewest tattoo? Tag us.” And an image of a man’s arm with a tattoo that reads ‘Bye’ – with the ‘ye’ highlighted.

Euronews Culture spoke to Briony Garbett, CEO of NAAMA Studios, to talk about the initiative, the rise in demand for tattoo removals, the pain-free technology they use, and the normalization of regret.

Euronews Culture: Why did you choose to offer this pro-bono service for the removal of Kanye West tattoos?

Briony Garbett: We’ve actually always had a programme for pro-bono tattoos removals. It’s called Second Chances, and the concept there is for tattoos that are particularly triggering from a mental health perspective or gang / hate tattoos. To be honest, when we started seeing this trend about Kanye tattoos, people were talking about regretting their tattoos and having a Kanye tattoo, considering what he stands for and one thing and another. It’s very triggering for people and embarrassing, as they have a very strong affiliation on their skin with that person. So it felt like quite a natural extension of our programme and what we were already doing.

How many clients have come forward?

Initially, we were responding to a couple of Tweets with people that have now become clients. And since then, we’ve had several people. We had two people in yesterday, and it’s been picked up more quickly than we anticipated. So far, we’ve had about 10 people through the London studio already.

Have you seen any particularly memorable Kanye tattoos?

(Laughs) Obviously, I wouldn’t like to say. However, there are some big tattoos that we’ve seen of Kanye that are not particularly indiscrete. So you can fully understand why people want them removed.

As I understand it, tattoo removal is quite a lengthy, costly (depending on the size and style of the tattoo, the going rate for such treatment is roughly £2,000 - approx. €2,300) and painful process – how many clients can you afford to take on in this specific initiative?

Well, just to debunk those myths, we do tattoo removal differently. We have our own technology at NAAMA, which is FDA CE approved, and it’s nowhere near the pain or the time that you’d be used to traditionally. That allows us to give a certain capacity to our Second Chances programme, and at the moment, within that programme, we are taking more people with Kanye tattoos. We obviously give priority to those clients that are existing clients and paying clients, but it’s an important part of our brand to always allow some capacity for people in the Second Chances programme, which Kanye West tattoos fall into at the moment.

Can you tell me a bit more about this technology that you use, because the accepted wisdom around tattoo removal is that it’s painful with those lazers blasting the skin… It looks terrifying!

(Laughs) It’s the reason we came to exist, actually. You would see in the news people like Mark Wahlberg saying that it’s like cooking oil being poured over his skin and you can smell the skin burning. Which conjures up fairly horrendous thoughts – I don’t see why anyone would want to go through that. So we thought it was a great opportunity to do something different.

We bought some IP from Princeton University which is very innovative and highly developed. It’s a LightSense laser system and it uses ultra-low energy in tiny spot sizes. So it’s very targeted and precise. We target the actual ink in the skin and not the surrounding skin. We’re not blasting the skin as the traditional lasers do. We take a much more precise and considered approach, which means you don’t get all of the downtime, the blistering, the scarring or the skin damage that you would see if you Google Image 'tattoo removal' and see some horrendous images. I’m proud to say that none of those are ours. Plus, it’s not painful, which is something our clients are hugely appreciative of as well.

It can vary significantly. We have some clients that can have their tattoo removed within 5 sessions, and some take longer. It depends a lot on the person, their health, the tattoo – how thick it is, how dark it is… And how healthy the person is, because laser targets the ink and breaks down the ink, but it’s the immune system that then flushes the ink out of the body. We need clients to be nice and healthy, hydrated and exercising as well, so it’s a two-person game.

What have been the reactions to your initiative and has there been any backlash so far from irate Ye fans?

To be honest, no, and I thought we might do. But we haven’t, and I think that those in the tattooed community can fully understand what it’s like. Whether it’s a Kanye tattoo or something that explicit, or something more personal to yourself that seemed like a great idea at the time and the future plays out differently, or your identities or values change and that tattoo doesn’t serve you anymore. I think that people have a little bit more empathy of what that is like to have something which seemed permanent on your skin and now you want it removed.

How do you respond to those who consider it virtue signaling or a way of riding the current wave of negative publicity for the rapper?

Well, this was something that we were doing anyway, and I make no qualms about it: we did look at what was trending and what tweets were of the moment with regards to tattoo removal, as we always are doing. So, I completely understand why people might feel that way, but it is an extension of a programme we were already running, and we’re just taking the opportunity to serve people that have the Kanye West tattoos at the moment.

In the Second Chances programme, what percentage is the greatest between gang tattoos or people just wanting to have their former partner’s name removed, for instance?

In the clients that come in every day, there is a strong percentage of partner’s names, or tattoos that they got done with their partners – matching tattoos, etc. But the Second Chances programme is reserved for those that are much more triggering in terms of mental health – people who tattooed on themselves in a period of deep depression, removing markers of a particularly tough time in their lives. We’ve got people removing tattoos where they were in abusive relationships. It’s a little bit more hard hitting normally than the Kanye West tattoos.

Over the years, tattoos have become more fashionable and more mainstream. Have you noticed an increase in demand for tattoo removal as well?

As you say, tattooing has become a lot more mainstream. 47% of US millennials now have a tattoo and 28% regret at least one of their tattoos. And as anyone who has a tattoo knows, it can get quite addictive, so a lot of people have more than one tattoo.

I think what has happened recently is that people are becoming more fluid in their identities. We’re more accepting that things change and we evolve as human beings. It’s OK not to like the same things you liked when you were 16. It’s more accepted that we can change the story on our skin. And providers such as ourselves have seen that opportunity in the market and wanted to provide something different that is more accessible to people, less painful, and hasn’t got all the drawbacks of traditional lasers.

There is also a lot more open discussion in society about mental health – do you see that as being a contributing factor the rise of tattoo removal and not living with regrets?

Definitely. We’re very considered in our approach as a brand at NAAMA – we don’t tend to talk about regret, actually. We tend to talk much more about the empowerment of removing the tattoo and the confidence that people have after that. Because although you might regret something, we want to normalize that – it’s no big deal. We’ve all done things that we regret when we were younger or something even over the weekend we thought was a great idea at the time. And tattooing is an extension of that. It just so happens that previously it’s been considered very permanent. There’s a normalization of regret and identities changing, so it’s a lot of those factors coming together.

NAAMA Studios are based in the UK - 109 Great Portland St, London W1W 6QG.