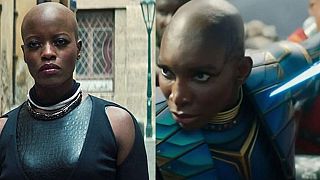 Florence Kasumba and Michaela Coel in Black Panther: Wakanda Forever   -   Copyright  Disney Marvel
The opinions expressed in this article are those of the author and do not represent in any way the editorial position of Euronews.
By David Mouriquand  •  Updated: 15/11/2022

Black Panther: Wakanda Forever is out and is, on the whole, a success that doesn’t buckle under the weight of the massive expectations brewed up by the Oscar-nominated first instalment.

However, while the film does well for a sequel to a cultural behemoth, it singularly fails when it comes to what Marvel were advertising: queer representation.

Yes, this again. And with Chinese and Kuwaiti censors rumoured to be in the process of banning screenings of the film because of its “gay content,” it's time to talk about this fabled LGBTQ+ representation...

It’s no hot take to state that Disney and Marvel have a frankly shocking track record when it comes to LGBTQ+ characters and queerbaiting.

Every time a new Marvel film comes out, the same old hype is trotted out about how wonderful it is that a queer character will be appearing in the film, and how the character(s) are “integral” to the plot. And every time the film comes out, a collective shrug results as any payoff is all-but-discarded or non-existent.

Marvel patting themselves on the back when it comes to LGBTQ+ representation and then failing to deliver is nothing new, a frustrating repeat offense that only reveals time after time to what extent they’re failing quite spectacularly.

Still, nothing stops them from repeatedly sending off their stars on promotional rounds with soundbites about the importance of queer representation.

In this case, we had Ugandan-German actress Florence Kasumba and Ghanaian-British screenwriter / actor Michaela Coel, who both play Dora Milaje warriors Ayo and Aneka in Black Panther: Wakanda Forever. The two characters, as per the comics, are in a relationship. Prior to the film’s release, both spoke about the importance of representation on screen, whether it be Black representation or queer representation.

Coel, of I May Destroy You fame stated in a Vogue interview that she had taken the role specifically because she was told her character would be queer.

"I thought: I like that, I want to show that to Ghana," she said, in reference to anti-LGBTQ+ legislation in the country. "People say, 'Oh, it's fine, it's just politics.' But I don't think it is just politics when it affects how people get to live their daily lives. That's why it felt important for me to step in and do that role because I know just by my being Ghanaian, Ghanaians will come."

The end result on screen? Some friendly banter between Coel’s Aneka and Kasumba’s Ayo that doesn’t indicate they are a couple in any way, and a blink-and-you’ll-miss-it forehead kiss towards the end of the film. Nothing more. A chaste peck was apparently enough to tick the half-arsed attempt at “gay representation” box in an ever-frequent display of self-congratulatory queerbaiting that is nothing short of insulting.

The characters don’t need to be defined by their sexuality, but they do need to be well-rounded characters. One kiss on the head means nothing if the characters, who don’t get much screen time, haven’t shared any meaningful dialogue.

Not that this reflects poorly on either Kasumba or Coel, mind you, who are excellent in the film. It’s hardly their fault that Marvel buckled once more, as there’s every chance that extra scenes were filmed and ended up on the cutting room floor due to studio pressure.

And therein lies the rub.

Let’s face facts: Marvel are too big to fail now and can afford to lose a few bigoted audience members at this point.

Yes, homophobic international laws represent a business reality for studios – with Saudi Arabia, Qatar, Kuwait, Jordan, Egypt, and countless others, including over 30 countries in Africa, still criminalizing same-sex relationships. The studios want to pander to queer audiences while not forsaking money from countries that ban gay content.

As simplistic as it may seem, if homophobic numbers are a concern, 'fess up and say that you choose not to defy international bigotry. No one is asking you to, even if many would like it. But don’t start congratulating yourself on how queer or inclusive your film is, let alone promise something that you singularly fail to deliver. To not have had a developed or nuanced LGBTQ+ character at this point is bad but it’s worse when fans are promised representation. And erasure at this point just looks like you’re admitting that queer characters don’t have stories that should be told.

To be fair, there was one openly gay character in Avengers: Endgame.

But it was a throwaway moment in which a member of a support group briefly mentioned a date he went on.

Not that it can be found onscreen.

But there’s no real show or mention of it, despite the Thor: Love and Thunder cast endlessly parading to the press that the film was “super gay.” The only thing audiences got were some colourful effects and two male anthropomorphic rock creatures who hold hands.

Hardly a sea change, is it?

As for the much-publicised queerness of Doctor Strange in the Multiverse of Madness' America Chavez (Xochitl Gomez), who was touted as finally bringing LGBTQ representation to the MCU, all it ended up delivering was the character - who is canonically a lesbian in the comics - wearing an LGBTQ+ badge on her jacket and her sexuality never acknowledged.

So far, the biggest form of queer representation was in the critically maligned (but actually a lot better than people would have you believe) Eternals, which saw Phastos (Brian Tyree Henry) married to a man and share an on-screen gay kiss. It wasn’t integral to the plot, and nor was it particularly envelope pushing. But it did feel like a small step forwards.

Even if the openly gay character was revealed as responsible for the start of nuclear warfare later on in the film...

What’s more frustrating when it comes to countries announcing they’re banning content - aside from the fact they’re autocratic regimes hostile to all queer representation and need to finally grow up - is that studios are reaping the benefits.

It looks good to be in apparent opposition to intolerance - especially when it comes from the biggest franchise on the planet.

It’s being banned, so surely Marvel are actually daring to show and develop meaningful same-sex relationships, even if the characters are background players in the scope of the overall narrative?

What this overlong rant boils down to is that it’s time for Marvel execs to stop pretending and actually admit that they have no intention to include queer characters with well-rounded developments or meaningful queer storylines in their superhero films.

Nothing wrong with that, but at least admit it and, for the love of all that’s good and pure, stop disingenuously selling your movies as if they’re increasing visibility and being more progressive. Casual references to queer relationships are not progress at this point. And whether studio motives are political or financial, you can’t proclaim solidarity with the LGBTQ+ community and then offer squat.

Granted, looking to Disney, Marvel and DC for queer representation is a fool’s errand, and audiences should know better than be surprised. Still, studios need to be held to account over their grandstanding inclusion pledges, and queerbaiting audiences is a cynical tactic that needs to end.

Over-promise something – deliver in spades.

Or just keep quiet and stop pretending your upcoming film is going to be something more than another superhero film. Anything else is just cowardice hiding behind empty lip-service.

None of this means to stay away from Black Panther: Wakanda Forever. It’s a strong sequel that is a poignant tribute to Chadwick Boseman, a superhero film that not only convincingly wrestles with themes of loss, grief and colonization, but actually sores when it forgets extended universe developments and focuses on Black representation and character growth.

But a film with queer representation, it certainly is not. No matter what Marvel tries to sell you.