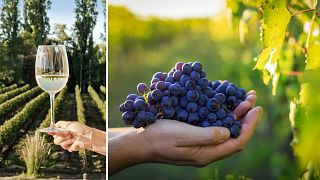 Under a blue sky, seasonal workers are hard at work clipping long rows of grapevines, harvesting a variety of Pinot Noir grapes during the summer heatwave.

But this is not a village in France, however, but Appledore in Kent in southern England, where high temperatures needed to grow the grape variety are no longer rare.

"At the moment, I think we have similar growing conditions to Champagne in the (19)70s and 80s," said Charlie Holland, head winemaker and chief executive at Gusbourne Estate.

"We're seeing the same sort of growth conditions, the same ripening period in England as back then in France," he added.

Climate change is modifying the wine landscape in the UK.

English winemakers are now able to produce a wide variety of still and sparkling wines from grape varieties including Pinot Noir, Chardonnay and Riesling that before were not possible - and this production could increase exponentially in the next few decades.

A growth in popularity for English wines

According to Holland, there's now "a huge appetite for English wines abroad."

"It's not very often you get a new vineyard region which appears on the world wine scene," he noted.

Despite the relatively high price - £45 (€52) for one of Gusbourne's sparkling wines - demand is growing both in Britain and abroad for the drink.

But while English winemakers such as Gusbourne have begun producing award winning sparkling wines in recent years, UK vineyards are still dwarfed on the international stage, covering a total of 3,800 hectares - or about one tenth of France's champagne-producing region.

However, a study published in July revealed that higher growing season temperatures over the next 20 years will further increase the UK's wine growing potential, allowing for the cultivation of grapes varieties such as Merlot, Sauvignon Blanc, Riesling and Semillon, which are hardly grown in the UK at present.

The study analysed climate data, including the growing season temperatures between 1999 to 2018 in Pinot Noir-producing areas of Champagne, and showed that similar climate conditions were likely to occur in England and southern Wales by 2040.

This assumes that climate change continues on its expected path amid global reductions in carbon emissions.

The risks of climate change

"That's a really quite frighteningly short period of time to have such a transition of varietals suitability, and that really shows the pace of change that certain areas of the UK are starting to see as a result of climate change," he said.

"Hopefully the world will get (its) act together and we won't see that continuing increase for too much longer, because that's threatening to everyone, including producers in the UK," added Nesbitt, who is chief executive of consultancy Vinescapes.