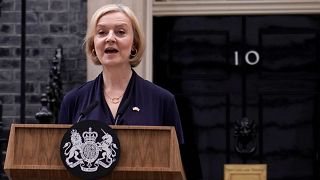 Liz Truss announces she is resigning as PM   -   Copyright  Alberto Pezzali/alberto pezzali
The opinions expressed in this article are those of the author and do not represent in any way the editorial position of Euronews.
By David Mouriquand  •  Updated: 20/10/2022

The omnishambles that is the premiership of British Prime Minister Liz Truss is drawing to an end.

Today, Truss has announced her resignation as Prime Minister after just 45 days in office, making her the shortest-serving prime minister in UK history. She will remain as PM until a successor has been chosen.

Truss has been at the heart of a shambolic and never-ending Westminister meltdown that was only heading in one direction: her resignation.

In the space of just over six weeks, Truss has managed to tank the national economy, with the launch of a “mini budget” which sent shockwaves through financial markets and forced the Bank of England to intervene.

She responded by sacking her best friend and finance minister Kwasi Kwarteng. More embarrassing U-turns followed leading Conservative party members to openly call for her to step down. Finally, her Home Secretary Suella Braverman (a woman who recently said that she dreamt of seeing asylum seekers being deported to Rwanda) resigned yesterday after 43 days due to a “technical breach” of government rules after she sent an official document from her personal email.

Add to this the fact Truss has the instant likability and charismatic delivery of a sinister, dead-eyed Thunderbirds marionette. Take a look back, if you dare, at any of her speeches. You may have to watch through your fingers while your spleen shatters into a million fleshy bits because of excessive amounts of cringing. Survive that and you'll understand why pollsters YouGov has ranked Truss as the most unpopular leader its ever tracked.

After Boris Johnson, that’s quite the achievement.

Dizzy from the nose-bleeding ineptness of it yet?

Fortunately, Euronews Culture is on standby with a handy guide for any leader to keep in their browser favourites. With the advice below even Liz Truss can leave the room with a modicum of dignity once the  leadership election is "completed next week." At which point, she will give her final speech as PM and, when you’re a politician, that farewell moment isn’t one you want to mess up.

Based on previous recent resignations and famous last words, here are some rules Truss should be aware of in order to cap off her short but eventful tenure.

Do keep it short and simple

Truss is openly a big fan of the late Margaret Thatcher, who was in office for 11 long years and 208 longer days. While Truss’ tenure won’t live up to that of her idol’s, maybe she could get inspired by the length of the Iron Lady’s resignation speech on 22 November 1990.

The whole thing was a mercifully brief 30-second farewell.

A few tears were shed as Thatcher departed from Downing Street, stating that she was "leaving Downing Street for the last time after 11 and a half wonderful years and we’re happy to leave the UK in a very much better state than when we came here."

So long, farewell and thank you for keeping the final act short.

This might be a bit of stretch for Truss, but she could give it the old college try.

We’re not talking about a tearful Theresa May voice-break – the former PM did describe leading the country as Britain’s second female prime minister as "the honour of my life" but getting choked up only led to jokes and derision.

Try instead a Gordon Brown approach.

PM for nearly 3 years, Brown resigned in May 2010 after Labour’s majority dwindled in the General Election, and gave the British public a stand-out quote: “And as I leave the second most important job I could ever hold, I cherish even more the first – as a husband and father."

It’s no “never flinch, never weary, never despair” Churchillian send-off, but ending on an understated emotional note with a tribute to your family might gain some much-needed sympathy points.

Asking for forgiveness or at least pretending to have some sense of self-awareness goes a long way.

Truss’ predecessor Boris Johnson was a shameful calamity of a PM who offered no apology despite the numerous scandals that plagued his time in charge. Hardly surprising, considering his entrenched delusion that he is above the rules and the fact his professional career is the model example of failing upwards. But considering the breaking of lockdown rules and the appointment of an alleged groper as deputy chief whip (to mention but those two), some contrition for the undignified chaos could have been apt.

Comparatively, Tony Blair did it better. He capped off his 10-year tenure with some apologies for “the times I have fallen short”, stating that “expectations were so high - too high.”

Respect him, hate him or outright despise him for being a Bush lackey in his decision to invade Iraq in 2003, Blair did do one thing for his final bow which was a canny spot of PR: instead of resigning outside of Number 10 Downing Street like most prime ministers, Blair gave his final impassioned speech outside the Trimdon Labour Club in Sedgefield, where he launched his leadership campaign in 1994.

Looping the loop by announcing his resignation at the same spot it all started was a shrewd move.

David Cameron forgot that his mic was still on and could be heard humming a tune as he walked away from the podium outside Number 10 on June 24, 2016.

You can act as solemn as you want when you’re leaving the country in the disastrous wake of a referendum you singularly messed up by brazenly believing the Leave vote didn’t stand a snowball’s chance in hell of winning… But if you sound like you’re heading off to a punt or making your way towards a particularly delicious leaving spread, flippantly humming what sounds like a Winnie the Pooh outtake while the rest of the country is on the brink of a collective aneurism, you will end up looking like a senseless fool who genuinely couldn’t care less.

Après moi, le deluge, and all that, but if you’re going to seem like you care, try to remain in character until the door closes. Or feign it until your mic is off.

Don't try to be cool

Over in the US, they do things differently. There’s showmanship.

Since George Washington, US presidents make a farewell speech to the nation and few were more memorable than Barack Obama welling up with emotion as he gave his final address as president. He paid tribute to his wife Michelle and praised the way she “took on a role (she) didn’t ask for and made it (her) own with grace and grit and style and good humour.”

Once again, good to praise the family, but no matter how powerful the official farewell speech, nothing beats his unofficial final hurrah at the White House Correpondents’ Dinner in 2016 when he delivered the send-off to end all send-offs: his now iconic literal mic drop.

Now, it worked for Obama, because the man is as smooth as Sam Cooke gently sucking on a cough drop.

But for the love of all that’s good and pure, avoid a forced mic-drop moment. Few politicians can pull it off, and Truss certainly isn’t one of them. She has the cool-factor of a sensible mum in a particularly dull biscuit commercial.

Boris Johnson’s typically bumbling car crash of a resignation speech – in which he referred to himself as “one of those booster rockets that has fulfilled its function” who will now “be gently re-entering the atmosphere and splashing down invisibly in some remote and obscure corner of the pacific” – was befitting of a man who looks like the human equivalent of an unmade bed and sounds like he’s swallowed a thesaurus.

However, his farewell to Parliament was even more memorable, as it yielded another groan-inducing moment when Johnson quoted The Terminator and uttered the closing line “Hasta la vista, baby” to the dispatch box.

Don’t leave the building by quoting films in an attention-seeking childish way, all in the name of banter. You are not The Terminator and you’re not funny.

Do get inspired by films and TV

That being said, some films and TV shows can provide inspiration.

Whether it’s Howard Beale in Network, who goes out in a blaze of ranty glory; Jerry Maguire quitting and asking Dorothy to come with him; Joanna finally expressing herself in Office Space; Lester in American Beautylegitimately blackmailing his boss and casting himself as “an ordinary guy with nothing to lose”; or the expletive rollcall of Half Baked, the seventh art has given us plenty of cathartic moments that feature meltdowns and monologues that show quitters emerging victorious.

Then there’s Buffy’s quitting scene in the finale of Season 3, in which she calmly embraces her powers and caps it off with the kick-ass retort: “This is mutiny” / “I like to think of it as graduation”; or even that beautiful farewell speech by Peter Capaldi’s Doctor in which he imparts wisdom such as “hate is always foolish, love is always wise; always try to be nice but never fail to be kind.”

But the one we’d all want Lis Truss to reenact is the famous Fight Club scene, for very obvious reasons:

If all else fails, say it with cake.

In 2013, soon after the birth of his first child, Cambridgeshire man Chris Holmes decided to quit his job at Stansted Airport and devote all of his energy to his real passion: baking. He resented his day job, but not his employers, so quit via the medium of cake.

He wrote the sweetest resignation letter in icing on top of a carrot cake:

A picture of the cake went viral, and what began as a creative way to resign ended up as a fantastic act of guerilla marketing, a perfect slice of social media self-promotion for his new cake business.

We’re not sure whether Lis Truss can bake or whether she'll want to set up a nice coffee shop now that her time in Number 10 is just about over, but maybe baking might be the best way to end her disastrous premiership once her successor has been chosen. Let them eat cake!