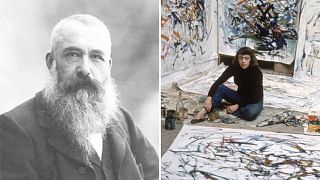 The Louis Vuitton Foundation in Paris is creating a visual, artistic and sensorial dialogue between the works of French impressionist Claude Monet and American abstract expressionist painter Joan Mitchell in a new exhibition.

Spanning across eight galleries, this exhibition offers visitors an enchanting and immersive journey through 70 iconic works by both artists.

While the art of Monet and Mitchell has long been compared by artists and scholars, for their similar use of colour, themes of nature and immersive painting style, the exhibition has been described as "completely unprecedented".

"Putting them together is obvious - because they're similar, because they're greats. But, at the same time, it's original," says Marianne Mathieu, co-curator of the exhibition.

Showcasing their singular perceptions of the same composed landscape through 35 works by Monet, including 25 belonging to the Musee Marmottan Monet (France) offering an overview of the Water Lillies, and 35 works – 25 paintings and 10 pastels by Joan Mitchell.

Most significantly, the exhibition brings together two exceptional bodies of work: Claude Monet's Agapanthus triptych (ca. 1915-1926), which is exhibited in its entirety for the first time in Paris in over 60 years, and Joan Mitchell's La Grande Vallée, regarded as one of her most important series.

The 'Monet-Mitchell' exhibition is also complemented by a retrospective of Joan Mitchell's work, enabling the European public to discover more about her unique art.

"We chose to organise a Joan Mitchell retrospective because, 30 years after the death of the artist, it seems that she is still one of brightest figures in painting from the second half of the 20th century," says Olivier Michelon, the Chief curator of the Louis Vuitton Foundation.

"It was also an opportunity to give Joan Mitchell her own space, so that visitors who are less familiar with her than Claude Monet, can discover her work which developed over around 40 years," he added.

The 'Monet-Mitchell' exhibition runs from 5 October to 27 February 2023 at the Louis Vuitton Foundation in Paris.