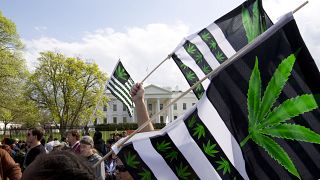 A demonstrator waves a flag with marijuana leaves depicted on it during a protest calling for the legalization of marijuana, outside of the White House   -  Copyright  Jose Luis Magana/AP
By Jonny Walfisz  with AP  •  Updated: 07/10/2022

It’s a big step from the US president to decriminalise weed across the country, as well as changing charging practices that disproportionately affect people of colour.

“No one should be in jail just for using or possessing marijuana,” the president said.

“Too many lives have been upended because of our failed approach to marijuana," he added. “It’s time that we right these wrongs.”

It’s a big shift from 1994 legislation that Biden backed to increased arrest and incarceration rates from drug crimes, particularly for Black and Latino people.

Since then, there has been a long call in the US for a relaxation of these drug laws, largely motivated to reduce convictions of people of colour in the country.

It follows a relaxation trend on the state level that has seen New York decriminalise low-level marijuana arrests.

Currently, medical use of marijuana is legal in 37 states as well as Washington DC. Recreational use for non-medical purposes has also been legalised in 19 states and DC.

Marijuana use has been decriminalised to different extents in 14 states.

Biden’s latest announcement is the newest step in a process that has brought the US’s approach to weed ahead of many of its European counterparts. For years, Americans who wanted to smoke up looked to Amsterdam as a haven for stoners. But legislation in the US is now blazing ahead of European states.

Let’s have a look at the legal status of marijuana in Europe today.

The holy grail for weed smokers. The Netherlands was radical when it decriminalised the possession of cannabis in 1972.

Since then, “coffeeshops” have been allowed to sell small amounts of cannabis that people can smoke on site or take home with them.

Importantly, the Netherlands has never legalised the use of weed, although it did do so for medical purposes. People who import, grow and export marijuana are still at risk of legal ramifications.

While there was a push in 2017 to legalise marijuana production and a ban on non-residents purchasing cannabis in coffeeshops, things have largely stayed the same in the capital Amsterdam.

In 2001, Portugal made the bold move to become the first country in the world to decriminalise all drugs. This included marijuana, and individuals are allowed to carry up to 25 grams of the herb.

Portugal’s sweeping drug reforms have changed the country's focus from punishment to treatment, without legalising the substances. So, you can’t buy it legally, but you won’t be getting into trouble for it either.

Much like the Netherlands and Portugal, many other countries have followed suit and decriminalised the use or possession of cannabis.

In Spain, possession of marijuana isn’t considered a crime, and usage in private homes is completely decriminalised. However, if you start smoking up outdoors, you may still put yourself in line for a fine as it is still a misdemeanour.

In 2015, Malta officially decriminalised the possession of marijuana. But fines were still given out to people caught with weed on them.

This was the status quo for some time until last year, when Prime Minister Robert Abela introduced a new law legalising the possession and individual growth of small amounts of cannabis. Smoking in public remains banned, but this makes Malta the first European country to legalise instead of just decriminalise.

The ones where it’s illegal, but you might be fine(d)

In countries like Finland, France, Germany, Poland and the UK, the possession of marijauna is still illegal.

But being caught with a small amount is more likely going to land you with a fine rather than a prison sentence.

While for the most part, people also get off scot-free if they’re caught with a single joint in these countries, it’s going to depend on the person catching you, which opens up the possibility of fines and even prosecution being netted out disproportionately to marginalised groups.

Malta aims to keep cannabis users out of jail. For some, it's too late