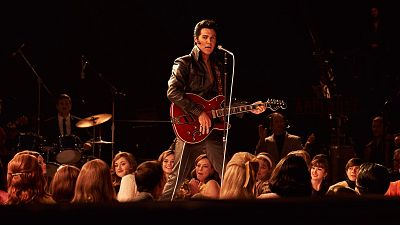 'Elvis' shook up theatres this weekend by raking in millions of dollars but tied with Top Gun: Maverick in a box-office rarity.

Baz Luhrmann's biopic portraying the 'King of Rock and Roll' made an estimated $30.5 million (€28.8 million) in weekend ticket sales, the same amount as Top Gun, which also reported $30.5 million.

Sunday's figures still need to be tallied to work out who will get the box office crown. They are expected Monday.

Studios can accurately predict Sunday figures based on Friday and Saturday, although numbers often shift by a few hundred thousand dollars.

For now, Elvis and Top Gun are going toe-to-toe in a dance-off (that is, if you prefer the 'King') or a dead heat (if Tom Cruise is more to your liking).

The rare box office tie is due to better than expected figures for Elvis and remarkably strong continued sales for Top Gun.

Top Gun: Maverick, a long-awaited sequel to the 1980s classic, has coined $1 billion (€0.95 billion) in ticket sales since its release five weeks ago.

Elvis, starring relative newcomer Austin Butler as Presley, smashed its expected sales of $25 million (€23.6 million), putting it ahead of the other recent music biopics, such as Elton John's 'Rocketman' which launched in 2019 with  $25.7 million (€24.2 million).

“I'm less concerned with who's number one and who's number two, and I'm more concerned that we hit this big number given that this audience has been the slowest to return to movie theatres," said Jeff Goldstein, domestic distribution chief at Warner Bros.

Around 60 per cent of Elvis's audience was over the age of 35.

Older audiences have been among the most hesitant to return to theatres following the pandemic. Yet this is changing, partially because of the pulling power of 'Top Gun', according to Goldstein.

Ticket sales for Elvis, which cost about $85 million (€80.3 million) to make, were driven by good reviews (78 per cent fresh on Rotten Tomatoes), word of mouth (an A- CinemaScore) and a glitzy Cannes Film Festival premiere.

“Elvis was a risky proposition: the music is dated, the character is not directly familiar, and the lead actor is unproven on the big screen,” wrote David Gross, a film researcher.

“But critics and audiences are responding. This is the Baz Luhrmann show, a music, dance and sex appeal spectacular — it’s a hit,” he added.

The Paramount Pictures film became the first 2022 release to reach $1 billion (€0.95 billion) in worldwide ticket sales, and the first starring Tom Cruise to do so.

It continues to rise up the record books, sitting 15th all-time domestically, not accounting for inflation.

The Elvis-Top Gun showdown — along with the 'The Black Phone', 'Jurassic World: Dominion' and Pixar's 'Lightyear' — has made for one of the most competitive, and busy, weekends for cinemas since the pandemic.