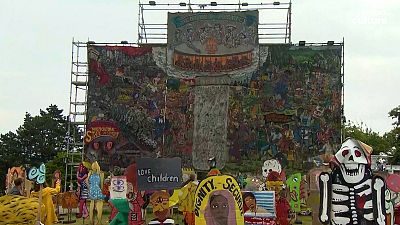 The board of Documenta fifteen said on Saturday that Sabine Schormann was leaving her post as chief executive by mutual agreement. It also expressed regret about what it described as “unambiguously anti-Semitic motifs” visible in one of the works shown at the opening weekend.

“The presentation of the banner ‘People’s Justice’ by the artists collective Taring Padi with its antisemitic imagery was a clear transgression and thereby caused significant harm to the Documenta,” the board said. It called for a swift investigation into the incident.

The contemporary art exhibition, which opened last month in Kassel, Germany, partially covered up the artwork and eventually took it down, after it was criticised for containing anti-Semitic images.

The move came after several groups including politicians and representatives of Jewish associations demanded the removal of the artwork.

The Israeli Embassy had also expressed outrage at the image, saying that the work was promoting Goebbels-style propaganda.

What does the controversial artwork show?

It features many satirical characters including a group of soldiers wearing a green uniform with pig faces. The soldiers are wearing red scarves featuring the Star of David and helmets labelled with the word 'Mossad' (Israel's national intelligence agency).

Another character with side-locks and fangs smokes a cigar while wearing a black hat with “SS,” the acronym for Hitler's black-uniformed Schutzstaffel.

"This picture, which is now at issue, clearly has anti-Semitic imagery. Protection against anti-Semitism, protection against racism and any form of misanthropy, these are the foundations of our coexistence. And that's where artistic freedom has its limit," explained Claudia Roth, the German Minister of State for Culture.

The Taring Padi collective, based in Indonesia, has already apologised for the incident. In astatementlast month, it said the work was referring to the post-1965 dictatorship in Indonesia.

"The imagery that we use is never intended as hatred directed at a particular ethnic or religious group, but as a critique of militarism and state violence," it said. "We depicted the involvement of the government of the state of Israel in the wrong way—and we apologise. Anti-Semitism does not have a place in our hearts and minds."

**German President Frank-Walter Steinmeier had raised the issue of anti-Semitism during his speech at the show's opening, saying there were “limits” to what artists can do when they address political issues in a country that is still atoning for the Holocaust.
**

French President Emmanuel Macron on Sunday warned against anti-Semitism and historical revisionism, as he commemorated victims of the Holocaust.

**France on Sunday ended a week of ceremonies marking 80 years since the Vel d’Hiv police roundup of Jewish families.
**

**On July 16-17, 1942, around 13,000 people were rounded up in central Paris and taken to the Winter Velodrome of Paris, known as the Vel d’Hiv,**before being sent on to concentration camps across Europe. It was the most extensive roundup of Jewish people in Western Europe.

"We are not finished with anti-Semitism and we must lucidly face that fact," said Macron.

What on earth is rave aerobics?

In pictures: how is summer solstice celebrated around the world?