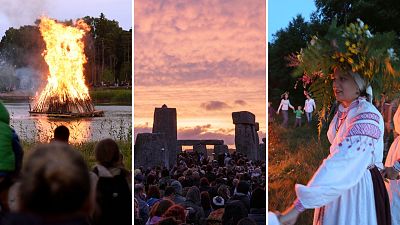 But what is it all about and how do people celebrate the solstice around the world?

The event marks the longest day of the year and the astronomical start of summer.

In the northern hemisphere, the summer solstice takes place between 20 - 22 June each year. This year it falls on Tuesday, with the UK enjoying 16 hours and 43 minutes of daylight.

The word solstice derives from the Latin "sol" (sun) and "sistere" (to stand still).

People around the world have long celebrated the occasion with a variety of wonderful cultural festivals and activities.

For the majority of cultures, the day involves enjoying sumptuous feasts, lighting bonfires, singing and dancing to traditional songs, and reconnecting with nature.

Here's a look at some of the most interesting summer solstice traditions from around the world.

One of the oldest and most well-known summer solstice celebrations takes place at Wiltshire's world-famous stone circle, Stonehenge.

Each year thousands of druids, pagans and ordinary folk gather to admire the spectacular views of the sunrise over the sacred site.

Incredibly, the historic stones align perfectly with the movement of the sun.

If you stand in the centre of the monument, you can see the sunrise just to the left of a large standing stone outside the stone circle, known as the Heel Stone.

The purpose of the spectacular boulder formations may still be cloaked in mystery, but they certainly serve as the perfect backdrop for a phenomenal solstice celebration.

No other country does the summer solstice quite like the Swedes.

In Sweden, the day of celebrations is known as 'midsummer'. It is most commonly celebrated in the Swedish countryside, in places such as Dalarna, Riksgränsen and the country's second-largest city Gothenburg.

Midsummer traditionally involves gathering with family and friends, raising and dancing around a maypole, decorating houses with greenery, and enjoying delicious food and drink.

The tradition is believed to have been celebrated as early as the 1500s and originated as a pagan festival of fertility and of light defeating darkness.

Midsummer also occupies a special place in the Finnish calendar.

The festivities are referred to as Juhannus or Ukko's celebration, in honour of Ukko, the god of the sky, weather, harvest and thunder in Finnish mythology.

In the Nordic country, the burning of huge bonfires on the eve of midsummer has long been a solstice ritual. It is said to keep evil spirits away and ensure a good harvest.

Traditionally the bonfires are burned at lakesides, riversides and by the sea.

Each year, thousands of yoga enthusiasts from across the globe flock to Times Square in New York City to celebrate the summer solstice with free yoga classes.

The annual yoga festival known as "Solstice in Times Square: Mind Over Madness Yoga," was launched in 2003 and designed to keep urban-dwellers centred, focused and present.

Modern-day Mayans in El Salvador celebrate the summer solstice by congregating at the ancient Maya site of Tazumal in the northwest of the country.

The Mayan descendants hold solstice ceremonies to help balance the energy of Mother Earth and to ask for abundant crops.

In El Salvador, the June solstice is referred to as the winter solstice because it comes during the rainy season, which they consider winter.

Each year along the shores of Lake Titicaca on the Isla del Sol in Bolivia, thousands of Quechua indigenous people gather for unique summer solstice ceremonies.

As the first rays of sunlight appear, members of the indigenous community raise their hands, a gesture which symbolises the taking in of good energy.

The Night of San Juan, Spain

Celebrating the arrival of summer is one of the largest annual festivals in Spain.

The Night of San Juan (also referred to as the Bonfires of San Juan) is another solstice tradition based around fire, and is held on the eve of 23 June.

Legend has it that the bonfires burned on this night help cure skin diseases and purify the body and soul.

Traditions vary all over Spain, but fire-jumping is commonplace. The hair-raising (or singeing) activity is believed to bring good luck for the rest of the year, with people commonly jumping at least three times over a bonfire.

Water also plays an important role in San Juan rituals. According to tradition, people take a plunge into the ocean at midnight in order to wash away any evil spirits.

In eastern Slavic cultures, such as Belarus and Ukraine, the summer solstice is celebrated on Ivan Kupala Day.

The eastern European celebration also gives lovers the opportunity to learn of their romantic fate.

Young couples hold hands and leap over fires. If they do not separate their hands, it means they are destined to be together.

It's customary for young women to wear floral wreaths during the celebrations, a symbol of purity and the blooming of a potential relationship.

The wreaths are later set sail down a river or lake.