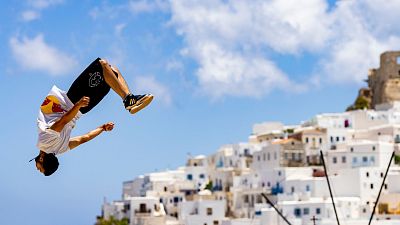 Billed as the most daring parkour competition in the world, the Red Bull Art of Motion 2022 showcased gravity-defying stunts and tricks from 16 international freerunners in the stunning setting of Astypalea in Greece.

Parkour - often referred to as freerunning - involves creatively moving through an urban environment: flipping, jumping and vaulting across various obstacles.

The event took place over three days where the athletes had to created three videos showing off their own unique style.

They were then judged on the difficulty, creativity, flow and execution of their routines.

Who won the competition?

19-year-old British teenager Travis Verkaik was crowned the Art of Motion champion in the men's event after securing a first, second and third place in the three challenges.

"This is unbelievable. I used to watch Red Bull Art of Motion when I was only 11 with my friends. And to win it is a dream come true," said Verkaik.

Meanwhile, 21-year-old American athlete Sydney Olson, who won the competition in 2019, triumphed again in this year's women's competition after a spectacular final run in the last event.

"It feels amazing to win again, like an out-of-body experience," Olson revealed: "The greatest feeling was stomping the run at the end, I tried to not let the occasion get to me. It's been one of the most incredible weeks of my life."

Never-before-seen images of the Beatles revealed in new book