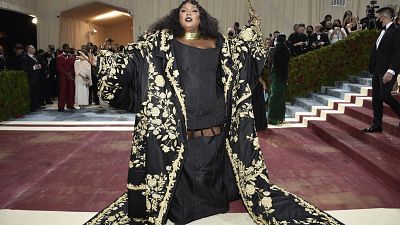 Lizzo responded to internet critcism with a statement today and rereleased her song from the upcoming album 'Special'   -   Copyright  Evan Agostini/AP
By Tim Gallagher  with Reuters  •  Updated: 14/06/2022

Lizzo has removed "a harmful word" from her new single 'GRRRLS'.

The 34-year-old star has responded to backlash after fans accused her of using an ableist slur in her latest track. The song will feature on upcoming album 'Special', due to be released on 15 July and the new version of the track was unveiled following its initial release on 6 June.

The artist has insisted she didn't mean to hurt anyone.

In a statement Lizzo said, "It's been brought to my attention that there is a harmful word in my new song 'GRRRLS.'

"Let me make one thing clear: I never want to promote derogatory language.

"As a fat Black woman in America, I've had many hurtful words used against me so I overstand the power words can have (whether intentionally or in my case, unintentionally).

"I'm proud to say there's a new version of GRRRLS with a lyric change. This is the result of me listening and taking action.

"As an influential artist I'm dedicated to being part of the change I've been waiting to see in the world."

What did people say about Lizzo’s new song?

In a tweet Diviney wrote, "Hey @lizzo my disability Cerebral Palsy is literally classified as Spastic Diplegia (where spasticity refers to unending painful tightness in my legs) your new song makes me pretty angry + sad.

"Thank you so much for hearing us Lizzo and for understanding that this was only ever meant gently and being open to learning, it honestly means the world.