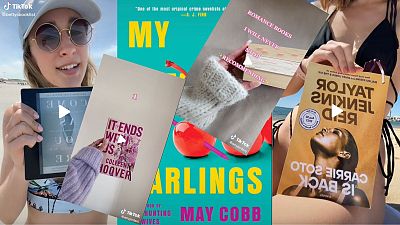 If you thought social media was shallow and superficial, think again.

In the midst of lip-syncing videos, altered selfies and cute animals, a new trend by the name of #BookTok means a new generation of wildly influential critics are deciding which books make it to the top of the charts.

Book talk is a hot topic on TikTok. #BookTok content has already amassed over 56 billion views, with creators (BookTokers) reviewing, categorising, acting and joking about their favourite reads.

“I just posted a Youtube video telling you about 31 books I read in January and describing each one in 10 seconds or less, YES I admit it I was highly caffeinated for this video,” reads one post.

“He was the closest thing I had to real love (he only exists on ink and paper) “#bookishumour,” reads another.

“I never knew you could feel that much pain from books,” says Amy Jennings, aka @amyjordan. A London-based BookToker. she's become an influential critic in the community with 9.4 million likes and 297.4k followers.

It all happened rather quickly after she started "playing around with the app", she says. The TikTok that took her to stardom, with over 10 million likes, listed three books that had “left her heartbroken and shattered for days.”

One thing we should all credit TikTok for is “for bringing so much respect to books that are in the romance genre,” says Elizabeth Cayouette, aka Bettysbooklist, another BookTok star.

Elizabeth is only 24, but her 260.4k followers care what she thinks about books and her feed has more than 4 million likes.

Fame also arrived quickly for Elizabeth after she began acting as the characters from books she was covering in her TikTok posts. This kind of roleplay has become one of her signature video styles and is now a major BookTok trend, something she says she can be “generally credited with.”

Elizabeth says her videos act as a trailer for a book, “which is something that really, for the most part, didn't exist before and is a really fun, exciting way to get your plot summary.”

"Everyone loves a book trailer!” she says.

These are the books that come highly recommended by Amy and Elizabeth right now.

The novels that left her 'heartbroken for weeks':

1. 'It ends with us' by Colleen Hoover

"It affected me more than anything I've ever read."

2. 'The seven husbands of Evelyn Hugo' by Taylor Jenkins Reid

"My heart broke at the end"

3. 'The song of Achilles' by Madeline Miller

A book that she loves at the moment:

“He’s just incredible. It's a love story, but the language is so lyrical and really appeals to your senses.”

Favourite books of all time:

3. 'The Seven Husbands of Evelyn Hugo' by Taylor Jenkins Reid

“A lot of books actually I just found because of a BookTok, like this last one by Taylor Jenkins Reid.”

“I love all Sally Rooney's books, I love her writing. Also because I'm Irish”

Book picks for the summer:

“Brilliant. It's just such a heartwarming story.”

“Another brilliant story by the same author of The Seven Husbands of Evelyn Hugo.”

3. 'Every Summer After' by Carley Fortune

“I've only just started it, but I can tell I'm going to absolutely love this one. But yeah, I love romance books,”

1. 'Carrie Soto is Back' by Taylor Jenkins Read

“This book was so phenomenal. Not only was it heart wrenching, but it was just so well-written. It is truly. It's definitely worth the pre-order.”

“It's a thriller. It's intense, it's scary. It's going to get your heart pounding. It’s set in these dreamy, steamy summer days and there’s an element of romance as well. It's just fun to see a thriller set against this really gorgeous summertime backdrop.”

3. 'While We Were Dating' by Jasmine Guillory.

“This book was just such a fun, glamorous read. I think it's the perfect light romance for the summer where you're on the edge of your seat and cannot wait to get to the end.”