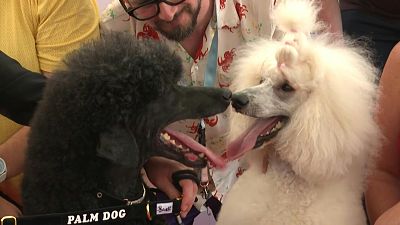 These poodles stand in for 'Brit', a fluffy silver poodle who starred as Beast in "War Pony", the directorial debut of Riley Keough and Gina Gammell   -   Copyright  Justin DAVIS / AFPTV / AFP
By Euronews  •  Updated: 28/05/2022

As filmmakers wait to learn who will win cinema’s top prize this weekend, the Cannes Palme D’Or, perhaps an even more popular award was handed out today – the Palm Dog, for best performance by a dog in a movie.

While Cannes is celebrating its 75th anniversary, the Palm Dog turned 21 years old this year. What was started as a low-key event by British journalist Toby Rose and his critic friends is now a ceremony on the beach with global media in attendance, plus sponsors, as well as an embossed collar for the prize-winning pup - but still retains its all its sense of fun.

This year’s winner is a silver poodle from the movie War Pony, directed by actress Riley Keough and Australian filmmaker Gina Gammell. The film has been playing in this year’s Un Certain Regard section of the festival.

One of the most-loved figures in this movie, which is set on a Native American Reservation, the poodle, Beast, is played by a trained dog, Britney. Beast is a faithful pet who is usually found waiting in the car and puts up with being bred for her puppies. However, her role is so essential that the title of the film was originally going to be Beast, in honour of co-writer Bill Reddy’s own dog, whose death inspired the story.

Unfortunately Britney couldn't attend the ceremony but two fluffy silver poodles stood in on her behalf for the ceremony.  Both Keough and Gammell gave their thanks for the prize over Zoom, describing Britney and her owner as “thrilled,” while a couple of local poodle stand-ins attended to accept the award, to cooing from the audience.

How did the Palm Dog come about?

The story of the Palm Dog is now even being made into a documentary – or should that be dog-umentary? – and Toby Rose thinks its success over the years is understandable.

“It started back in 2001, because I had the great fortune to have a lovely fox terrier called Mutley, and he lived with me as I was doing my job as a showbiz journalist in Paris,” Rose explains.

“He came with me everywhere to interviews, and he seduced all the interviewees. It was exciting to see his effect on anyone. He even ended up in a short film, but I realised there could never be an award for him. So that’s how it started – we set it up because dogs can really make an impact on screen, but they didn’t have a chance of a prize.”

Rose also runs an Instagram account, @dogsrocking, where he is regularly pictured with dogs he meets in life, and every year manages to secure a dog of the right breed to stand in for the winning canine – who is unlikely to be able to travel to Cannes. Local dog owners that Rose encounters on the Cannes Croisette are often thrilled, if a little surprised, to be invited to the ceremony.

“One thing we’ve never struggled with is whether they’ll be dogs present at the event,” Rose says. “We always have what we need, and it just goes to show – dogs are always there for us humans.”

A cult fixture in the Cannes calendar

2022s big press turnout is partly because in recent years, the directors of the winning Palm Dog film have attended the ceremony.

Last year, actress Tilda Swinton wore the dog collar herself after she accepted the award on behalf of her own springer spaniels Snowbear, Rosy and Dora, when they won the award for their work in The Souvenir Part II. (The dogs were busy on a Scottish beach at the time.)

In 2019, director Quentin Tarantino turned up in person and accepted the Palm Dog for Brandy, owned by Brad Pitt’s character in the film.

“I have to say I am so honoured to have this,” Tarantino said at the time. “I’ve told everybody, I have no idea if we’re going to win the Palme d’Or. I feel no entitlement. But I did feel that I was in good standing to win the Palm Dog. So, I want to dedicate this to my wonderful actress Brandy. She has brought the Palm Dog home to America.”

Who is in the running for the Palm Dog this year?

The Guardian’s Film Critic, Peter Bradshaw, read out this year’s list of nominees and assessed their performances – and runner up Grand Jury prizes were given to Marcel, a movie by Jamine Trinca about a woman whose dog (Marcel) goes missing. Icelandic film Godland shared the runner-up prize, thanks to a stellar performance by an Icelandic sheepdog.

On a more serious note, the ‘Dogmatarian’ award was given this year to Patron, the Jack Russell terrier who sniffs out explosives in Ukraine and who was honoured by President Zelensky recently for his service. Representatives from the Ukrainian Pavilion at Cannes attended to accept the award on his behalf.

Rose says the documentary is about this now essential-to-attend Cannes event isn’t finished yet, but surely, it’ll qualify for a special screening at Cannes next year? At any rate, one look at the attendees’ relaxed faces as they fussed and praised the dogs showed that unlike other award ceremonies at the festival, this one lowers stress levels.

“Cannes is a lot of business, and it is stressful and it’s full of demands, “Rose says. “To be honest, we host this at the end of the festival because you can give this award without fear or favour, and by now, a lot of people just want a relaxing moment. This is just about pure happiness.”