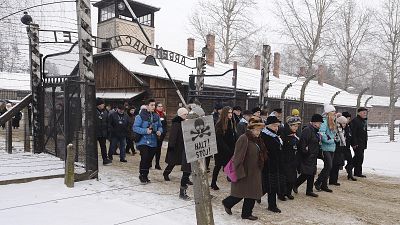 Former prisoners and their guests arrive for the ceremony marking the 74th anniversary of the liberation of KL Auschwitz-Birkenau   -   Copyright  Czarek Sokolowski/Copyright 2019 The Associated Press. All rights reserved.
By Jonny Walfisz  •  Updated: 11/05/2022

An 89-year-old Holocaust survivor has finally told his story, 77 years after the end of the Second World War.

Léon Placek, who lives in Paris, has released a book entitled I Was 10 Years Old in Bergen Belsen – a memoir of his time at the Nazi concentration camp in northern Germany.

Having survived one of the most horrific chapters in human history, Léon did not initially want to tell his story. It was pressure from one of his sons that led to him agreeing to recount his experiences.

Placek told AFP: “He harassed me for two weeks! I gave in.”

Placek, a chartered accountant who still practises with his firm Placek & Apelbaum, first stood in front of a group of secondary school pupils to tell his story.

Then, with the help of journalist Philippe Legrand, he wrote down his testimony. In the book, he says of his uncertainty over speaking out until now: "We were like strangers, returning from a world from which one does not generally return. I hesitated for a long time to break this silence... My word? What's the point! Will it carry, this word? What could I say?"

Almost eight decades might seem a long time to wait to tell a story, but it is not uncommon amongst Holocaust survivors, many of whom wanted to move on after the war, and not to discuss what they had lived through.

Moreover, as French literature professor Dominique Moncond'huy points out in his book The Human Species and Other Writings from the Camps, when people did come forward, testimonies were often treated with indifference or a lack of understanding.

“Nothing, without a doubt, could be more violent for survivors, in the discomfort of returning among the living from whom an irreducible distance separated them, than to note that their voice was not heard,” he writes.

Despite the difficulty inherent in telling these traumatic stories, several Holocaust survivors have recently published memoirs, perhaps in the awareness that after 77 years, their numbers are dwindling.

Lili Keller-Rosenberg, another Bergen Belsen survivor, published And We Returned Alone last year at the age of 88. She said she first told her story to a group of students in 1983, but only found the courage to commit it to paper recently.

“I do not sleep anymore,” she writes in her book. “We are no longer numerous, the deportees. In Hauts-de-France [the northernmost region of the country], I am the last survivor who can still testify.”

Génia Obœuf, a survivor of the women’s concentration camp Ravensbrück, which Keller-Rosenberg also passed through, died aged 98 before the publication of her memoir later this month Génia et Aimé.

Julia Wallach, an Auschwitz-Birkenau survivor, waited until she was 96 before publishing her story. Her novel, God Was on Vacation, co-written with Pauline Guéna, will be released this November.

“Even now, it is difficult for me to tell my story,” she says. “The arrival at Birkenau! Even now, I still have the cries in my ears.”

Is needle-spiking spreading across the European club scene?