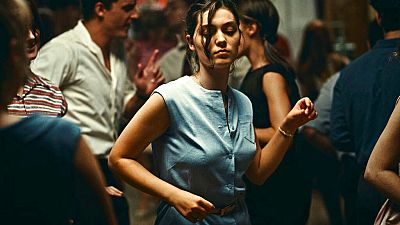 An award-winning filmmaker's searing account of a young woman's quest for an illegal abortion in 1960s France is to hit cinemas in America for the first time tomorrow.

Audrey Diwan's 'L'événement' ('Happening'), which won the Golden Lion at the Venice International Film Festival last year, makes its US debut at a time when the country is in tumult over news the Supreme Court may be poised to overturn a landmark ruling, in the 1973 Roe v. Wade case, that legalised abortion across the 50 states.

A leaked draft opinion, which the Supreme Court confirmed was genuine on Thursday, would allow individual states to heavily regulate or even outright ban the procedure, to the horror of many women in the US.

Diwan's film is set in 1963, 12 years before abortion was legalised in France. Based on a 2000 book of the same title by Annie Ernaux, it charts the plight of student Anne Duchesne as she struggles to deal with an unwanted pregnancy.

Diwan discovered the book, one of Ernaux's less popular works, after having had a termination herself. "I read it because I'd had an abortion and I needed a book, and I even said if I don't find it, I'm going to write it myself.

"It was very hard for Annie Ernaux to write about that moment of her life. And the fact that there was silence afterward was difficult for her too; nobody wants to hear about that journey."

The film, which was also nominated for a European Film Award in 2021 and a Bafta in the Best Director category this year, is described by its creator as an "intimate thriller".

With the clock ticking, Anne seeks out and undergoes two illegal backstreet abortions, risking her life and possible imprisonment. It culminates in her holding back screams of pain because the walls are too thin.

Anamaria Vortolomei, 23, who plays Anne, also read Ernaux's book in preparation for shooting. "I discovered my ignorance towards a subject that is still taboo and shrouded in silence," she told AP. "And I was very angry.

"Angry against me, against the lack of knowledge I had on this topic. And also against the injustice that many women nowadays have to face in countries that don't allow them to abort legally. That anger helped me to portray my character with determination and ambition."

'Happening' opened in cinemas in in the UK in April, around the same time as the US state of Kentucky became the first to effectively block access to abortions by banning all terminations after 15 weeks.

Of the timeliness of its limited release in the US, Diwan said: "I think the magic of cinema is not artistic gesture. The audience comes with political questions.

"I really, really never wanted to be shocking or provocative. I think this reality is quite shocking, but the movie is not trying to be.

"The only thing that matters now, when we see the laws going back and forth, is to be able to have discussion. So yes, here it is more important than lots of other countries."