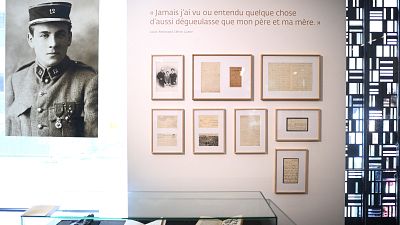 It is a rare thing when the story of a book's publication is as fascinating as the plot of the novel itself.

But that might be said of 'Guerre' (War) by one of France's most renowned and controversial literary figures, Louis-Ferdinand Céline, which arrives in bookstores on Thursday May 5, 78 years after the manuscript disappeared.

A new exhibition opening on the same day aims to explore the story of Céline's lost manuscripts and how they happened to be rediscovered decades later.

Who was Louis-Ferdinand Céline?

Céline's reputation has somehow survived despite the fact that he was one of France's most eager collaborators with the Nazis.

Already a superstar thanks to his debut novel 'Journey to the End of the Night' (1932) - which is still taught in schools - Céline became one of the most ardent anti-Semitic propagandists even before France's occupation.

In June 1944, with the Allies advancing on Paris, the writer was forced to abandon a pile of his manuscripts in his Montmartre apartment.

Céline expected rough treatment, having spent the war carousing with the Gestapo, handing in Jews and foreigners to the authorities and publishing racist pamphlets about Jewish world conspiracies.

For decades, no one knew what happened to his papers, and he angrily accused resistance fighters of burning them.

But at some point in the 2000s, they ended up with retired journalist Jean-Pierre Thibaudat, who passed them completely out of the blue to Céline's heirs last summer.

Despite this unsettling history, the reviews of the resulting 150-page novel, 'Guerre', published by Gallimard, have been unanimous in their praise.

Gallimard is expecting blockbuster sales: 80,000 copies have been printed for Thursday's release.

The publishing house has yet to say whether there will be translations.

Like much of Céline's work, "Guerre" is deeply autobiographical, recounting his terrible experiences during World War I.

It opens with 20-year-old Brigadier Ferdinand finding himself miraculously alive after waking up on a Belgian battlefield, and follows his treatment and hasty departure for England - all based on Céline's real experiences.

If French reviewers seem strangely reluctant to focus on Céline's anti-Semitism, it is partly because his early writings ('Guerre' is thought to date from 1934) show little sign of it.

'Journey to the End of the Night' was actually a hit among progressives for its anti-war message, as well as a raw, slang-filled style that stuck two fingers up at bourgeois sensibilities.

Céline's attitude to the Jews only revealed itself in 1937 with the publication of a pamphlet, 'Trifles for a Massacre', which set him on a new path of racial hatred and conspiracy-mongering.

He never back-tracked. After the war, he launched a campaign of Holocaust-denial and sought to muddy the waters around his own war-time exploits - allowing him to worm his way back into France without facing any repercussions.

Unveiling what happened to Céline's manuscripts

An exhibition about the discovery of the manuscripts opens on Thursday at the Gallimard Gallery and includes the original, hand-written sheets of 'Guerre'.

They end with a line that is typical of Céline: "I caught the war in my head. It is locked in my head."

In the final years before his death in 1961, Celine endlessly bemoaned the loss of his manuscripts.

The exhibition has a quote from him on the wall: "They burned them, almost three manuscripts, the pest-purging vigilantes!"

This was one occasion - not the only one - where he was proved wrong.