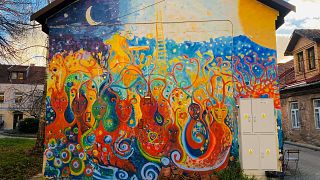 Walk around Vilnius and you may stumble upon something unexpected.

It is a tiny, self-declared independent state called the Užupis Republic in the Lithuanian capital.

It is one of Vilnius's oldest neighbourhoods, dating back to the 15th century. Throughout history, Užupis was inhabited by Jews, helping Vilnius become known as the ‘Jerusalem of the North’.

During the Soviet era, Užupis went to ruin. Its thriving Jewish community had been massacred by the Nazis and their Lithuanian collaborators in the Second World War. This left swathes of abandoned housing, which fell into disrepair.

Following Lithuania's independence from the USSR in 1991, the artistic community flocked to Užupis in search of cheap rent, a stone's throw from the national art academy.

Around 1,000 of Užupis's 7,000 residents are artists (15 per cent of the population) - making it one of the most concentrated artistic areas in the world.

The cornerstone of Užupis's creative scene is the 'Art Incubator', a derelict factory turned artistic residency on the neighbourhood's riverbank.

"It started life as a squat," said Ieva Matulionyte, a third-generation Užupian and former manager of the Incubator. "It was a ground-up gathering for artists who were not accepted in the art scene of Lithuania.

"They were rebellious," she added.

The squatters eventually struck a deal with the local authority to establish an official art incubator - the first of its kind in the Baltics. With 40 studios, Ieva described the building as a "stepping stone” for young artists.

"They get the support they need: Exposure and very, very favourable rent."

Artwork soon spread from the Incubator onto the streets. Be it down narrow alleyways, on peeling walls or in the neighbourhood's garden, art is everywhere in Užupis.

This art, says Ieva, changed the character of the area and dramatically improved living conditions.

"We made the neighbourhood more exciting, fun and livable," she said. "Before the 1990s, Užupis was dilapidated and dangerous. Artists brought about a change."

But things were not all rosy.

"Artists made the area attractive," said Ieva. "Then people with money settled in. Developers came.

Užupis is jam-packed with cafes, bars and social spots, despite covering less than 1 square km.

In the summer, people often gather and party along the riverbank. Loud music and large plumes of cannabis smoke seem not to faze the Užupian authorities.

During Lithuania's second lockdown last winter, the cafe was the only place in the city still serving beer (outside, of course).

"The atmosphere here is completely unique," said local resident Hiva Azizian. "For me, the best thing about Užupis is how laid back it is.

"Vilnius is full of fancy bars and restaurants that are stuffy and soulless. There are no pretences in Užupis.

"You can be yourself here," she added.

Užupis began as an April Fool's Day joke between friends, Romas Lileikis and Thomas Čepaitis. The original squatters of the Incubator, they created the republic to attract visitors.

Yet it soon took on a life of its own.

Užupis now has a national anthem, constitution, bishop, two churches and mascot, besides a government, constitution and currency.

It even had a navy of four boats and standing army of ten, until they were disbanded in favour of a more peaceful republic.

One date on every Užupian's calendar is Užupis Day, 1 April.

Travellers can get their passports stamped as they cross into the republic, use the local currency and help themselves to beer flowing from the fountain in the main square (yes, you read that right).

To celebrate the republic's independence, local beer pours from the spout of an old fountain underneath the angel of Užupis from morning until night.

And when that is finished, wall-to-wall surrounding bars welcome revellers with open arms.

Užupis is famed for its constitution. Drafted out by Lileikis and Čepaitis one beer-fuelled night, it lays out the rights of every Užupian.

Much of the constitution is serious and humanist, such as 'everyone has the right to hot water, heating and a tiled roof.'

The republic's founders were inspired by the Greek philosopher Aristotle.

They wanted to create a state based on Aristotle's idea that a country's population cannot be too large, otherwise it becomes unmanageable and disorderly.

If people know one another they are less like to do wrong or hurt someone else, they believed.

Yet Užupis is far from inward-looking.

It named a park ‘Tibet’ and made the Dalai Lama an honorary citizen in support of the region - much to the ire of the Chinese government.

Užupis also has more than 300 ambassadors, representing streets and municipalities, alongside nations.

Although largely ceremonial, these ambassadors have translated the constitution into 43 languages, including Yiddish, Icelandic, Hindi, Sanskrit, Kazakh, Korean, Gaelic and Old Prussian (which has only 50 speakers).

Užupis has captivated tourists since its inception in 1997.

"Our spontaneous and unexpected character is truly unique," said Ieva. "No wonder people want to visit."

Yet this popularity is threatening the area.

"While it is good that foreigners get insights into something strange and artistic," said Hiva. "They have changed the area so much.

"Slowly the vitality, the spirit is fading away," she added.