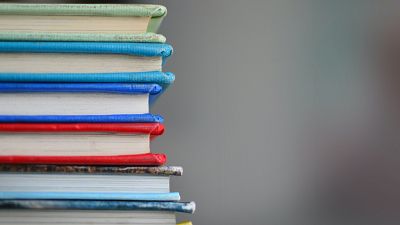 For years market analysts predicted the end of the book. With the rise of kindles, the internet, and TV streaming, who still needs them?

“Everybody thought the physical book was under threat and thought it was going to disappear 20 years ago, that never happened,” says Ian Falkingham, the strategy lead for books, music and homewares at Oxfam.

Oxfam sells 60,000 books across 400 shops, with 130 standalone bookshops all over the UK, as well as in Paris and several locations in Ireland; all selling items donated by the public.

Book sales make up Oxfam’s largest category of sales at 30% in store, a figure which has been steady for the last half a decade, meanwhile, since the pandemic their e-commerce operation has doubled used book sales from 20 to 40 per cent.

The centrality of e-commerce to the Oxfam business model has spread enthusiasm through their vast team of volunteers.

“I remember…the shop manager for the Cheltenham shop rang me one day and said I'm in my shop and I’m going to list every book I've got in the shop online,” says Falkingham.

“People looked at the success of shops like that and went, oh, I get it. There's a real opportunity there.”

Is the circular economy the key to second hand success?

It is often said that e-commerce rests on price, range and service, without coming high in these things you can’t be successful in the competitive world of online sales.

“But there are now four things that people are looking for from our business, and that is the sustainability angle.”

After humble beginnings 20 years ago buying unwanted charity shop books by the kilo and selling them on Ebay, WOB now sells a book every 2 seconds, running to 18 million sales a year. Their business grew 30 per cent in 2021 with a predicted growth rate of up to a quarter this year.

A post shared by Wob (World of Books) (@wob.group)

Their business model is green focused; a registered B-corp they have made a commitment to send nothing to landfill, recycling tens of millions of books a year and saving half a million trees in the process.

This is especially important to young people, who see the climate crisis looming large in their future, with the 18-35 bracket making up the largest group of WOB’s online shoppers.

“For that group of people, sustainability is a really important factor,” says Bell.

“Circular economy is what we're all about.”

“It wouldn't even have been thought of 20 years ago when we started growing our business,” adds Falkingham.

“But it is an important part of why people support us now.”

Emotional connections to the written word

A comparison of sorts can be drawn between books and music. Physical music sales have collapsed with the rise of streaming, with only vinyl sales on the rise, due to either its superior sound quality or role as an aesthetic status symbol.

However, while physical music seems to be on an inexorable decline, ebooks - which were predicted to be embraced by millennials whole heartedly - have stabilised at 20 per cent of the market share.

Meanwhile second-hand books have become an internationally booming business. Oxfam ships from their UK stores internationally, and WOB recently opened a warehouse in the US for their North American buyers. Nor is their reach confined to the Anglicised world with 9 per cent of sales going to mainland Europe.

But why has the written word not gone the same way as the CD? Is there something special about books?

“Without doubt, there is a connection between people and books, they are thought of differently,” says Bell.

“Very few people will throw their books into the bin, because of what they stand for.”

It may be that the psychology of books as symbols of knowledge, learning and power run too deep in our social fabric for any of us to comprehend truly. But the positive emotions connected to books, in the form of enjoyment from reading, emotional revelations and childhood memories are obvious.

Bell has a plethora of anecdotes about buyers who’ve sought after beloved childhood novels to read to their own families, including one woman in Australia whose order arrived only to have her own name written in it from when she was young.

“It might even be like, I lent it to my mate down the pub. And he never gave it back to me back so I bought it back off you, then lo and behold, you know, it had my name on the inside,” says Bell.

There’s a beautiful poetry to the circular economy bringing back sentimental items to their long lost owners, and it’s something which symbolises the twin driving forces of the booming second-hand book market.

A new way of sustainable thinking and modern e-commerce combined with an ancient reverence for the written word.