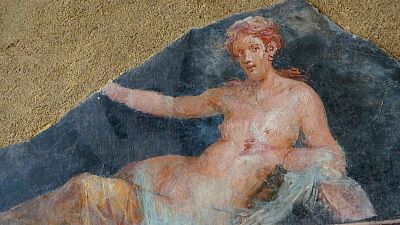 A new exhibition explores why eroticism and sensual images played a central role in the daily life of Pompeii   -   Copyright  AP Photo
By Jez Fielder  with AP  •  Updated: 22/04/2022

'Art and Sensuality in the Houses of Pompeii', which runs from 21 April to 15 January 2023, showcases the eroticism that characterised virtually every space in the city, from private homes to bathrooms, from taverns to public spaces of the community.

The aim was not to scandalise, but to capture the lofty Greek ideal of the naked body.

"We cannot think about Eros and sensuality with the same eyes we look at it today. Its omnipresence is, of course, a sign of it conveying values which are more general than sex rather than… but it conveys values like being culturally elevated, being part of a larger high culture, grace, and knowing how to deal with the world. This is a way to deal with the external world," says Maria Luisa Catoni, Professor of History and Archaeology of Ancient Art and curator of the exhibition.

The show is located under one of the arcades of the great gymnasium. It leads the visitor through a typical Pompeian house, with the works displayed in each room: from the atrium to the cubiculum (bedroom), the triclinium (banquet hall) and the peristyle (colonnaded inner garden).

"Of course, the pieces do not come from one single atrium of a specific house. But we wanted the public to understand the physical connection between what they see here and what they will see around the archaeological parks," explains Catoni.

The first room upon entering a Roman house was the atrium, a mix between a courtyard and a large reception room.

It was the traditional part of the house, a place of ancestral worship often home to the altar of the Lares Familiares, deities representing the protective spirits of the deceased ancestor.

When Pompeii was destroyed in 79 AD, many of the atriums contained examples of traditional Roman art expressing the social and religious values of the society, but also Greek-inspired works of art, characterised by a new sensuality, such as the first two works of the exhibition: a fresco of Narcissus, the young man in love with his own image, and a sculpture of Priapus, the god of abundance and fertility who often watched over entrances and gardens.

Images of couples during sexual intercourse were found not only in places of prostitution, as in the case of the Lupanare, the brothel of Pompeii, but also in private environments.

Leaving the 'official' part of the house, centred on the atrium, one entered the most intimate space of the peristyle, a porch formed by a row of columns that surrounded the courtyard from which one accessed the triclinium, the room where luxurious banquets were held.

In these rooms, frescoes of boys and girls alluding to heterosexual and homosexual encounters served as a backdrop for conversations and discussions between those at the banquets.

Whether or not they stumble upon any of Talbot Rothwell's characters, such as Ludicrus Sextus, his promiscuous wife Ammonia, their daughter Erotica and their virginal son Nausius, is perhaps one discovery too many.