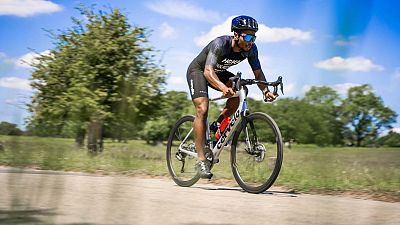 Sam Holness is an endurance athlete. He's completed triathlons, an event consisting of swimming, cycling and running. He’s run numerous full 26-mile marathons and half marathons and he’s showing no signs of slowing down. The Ironman champion holds a degree in sports science and also lives with autism. His mission in life is to prove that autism is a superpower and not a disability that prevents him from achieving his dreams.

The 28-year-old lives in London with his parents. His father, Tony, also happens to be his coach. "Being a coach means that I take him out every day to do his training and nutrition and I'm also his taxi driver as well as his bike mechanic. I really do everything to make his life as an athlete simple and that's my primary job." Tony tells Scenes.

Autism is defined by a certain set of behaviours and is a ‘spectrum condition’ that affects people differently and to varying degrees. Autism is a complex disability that appears during early childhood and can impact social skills, communication and self-regulation. While there is no single cause of autism, early diagnosis helps identify a person's support and services.

According to the National Autistic Society, there are 700,000 autistic people in the UK. They come from all backgrounds, identities and cultures. The society says there is a lack of research about the experience of people from Black, Asian, and minority ethnic (BAME) groups. So it can be even harder for autistic people in the BAME community to get the support they need.

A report from Autism Spectrum Disorders in the EU (ASDEU) studied over 600,000 children across 12 countries in Europe. The report led to an indication that autism spectrum disorder affects around one in 100 people in the EU.

"I think the strength that people with autism have in terms of their focus, their ability to sustain long tasks for long periods without being distracted, are just wonderful traits and I think if we can take those traits and convert them into meaningful tasks, then wonderful opportunities exist for these individuals," says Tony.

Autism as a superpower

Sam's been into sport since a young age. He learned how to swim at the age of three and it remains the discipline he enjoys the most. He believes his autism is his 'superpower' that has helped him reach his athletic goals.

“There's a lot of humility there in terms of who he is and I think it's the level of focus and commitment is the other thing,” says Tony. “You know, it's not giving up. The world is surprised, but I'm encouraged by that trait in his personality, he just wants to keep going,” he adds.

Sam fulfilled a lifelong dream in 2021. He competed in the gruelling Ironman 70.3 World Championship. Forever etching his name in history, he finished the race in five hours and 44 minutes, becoming the first triathlete known to have autism to cross the finishing line. The Ironman race consists of a 1.2 mile swim, a 56 mile bike ride and a 13.1 mile run, one of the toughest endurance tests an athlete can face.

Sam is dedicated to being the best and trains 22 to 24 hours per week. His father, Tony, focuses training on pacing and speed. This is a technique athletes prepare the body for endurance. First, they jog slowly for around 10 minutes, then sprint at total capacity for approximately two to five minutes.

"My job is to make sure he does the sets in the times that we've set the lap. Make sure he has nutrition, his liquids and if he needs any sort of power carb bars to keep him going throughout the session as well, but those sessions are primarily about speed and power," Tony explains.

Training Sam is all about the physical and mental aspects in equal parts. He can be vulnerable to mental challenges such as route maps, orientation and physical interaction. It's all part of the challenge of coaching someone with autism as an endurance athlete.

People with autism often like to stick to a routine and avoid close and personal contact with others. This is to try and prevent an event or situation they perceive as stressful or frightening. As a family, the Holnesses decided to overcome that fear by tackling the fight or flight response head-on and signed Sam up for Judo, a physical contact sport. It worked. Sam is a brown belt in Judo, just one step away from a black belt.

"The same happened with his triathlon. I remember the first time he went in the water, he was reluctant, the gun had gone off and he sort of stood around and looked at the water, put his toes in it, looked around it. The last thing was he took a breath and then jumped in. Once he jumped in, he was off," recounts Tony.

Tony shared Sam's story on social media. He was delighted to receive messages of joy and inspiration flooding in from parents of autistic children.

"I don't think I wake up one morning and there isn't a DM from somebody saying that Sam has inspired them to get up and run or to walk, or they're giving their children more patience," says Tony.

As an ambassador for Ambitious about Autism, Sam hopes to inspire others on the autism spectrum to take up a sport and take an active role in their health and well-being.

"If you can just inspire people and raise the awareness of autism, help employers to start recruiting more people on the spectrum and do it through sport, then that's narrowing it down to what our mission is and what we want to do," explains Tony.

'Super Sam' is highly ambitious and aims to smash future events to add more medals to his trophy cabinet.

The United Nations General Assembly declared 2 April as World Autism Awareness Day to highlight the need to encourage and increase awareness for people with autism.