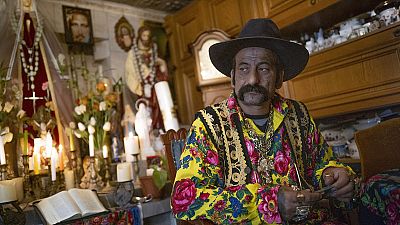 Zoltan Sztojka, by his own account Hungary's last Roma fortuneteller, lays 36 weathered tarot cards on a table at his home in the village of Soltvadkert, and peers at them from beneath the brim of his large felt hat.

As he turns the cards with his heavily ringed fingers, he presents his clients — whom he calls “patients” — details of their past, present and future, a skill of divination he says he inherited from an “unbroken family lineage” of fortunetellers dating back to 1601.

“They were fortunetellers and seers,” he says of generations of his ancestors, who were “chosen by God” to practice the gift of fortunetelling.

Sztojka, 47, whom friends and locals call simply “Zoli with the hat,” uses cards and palm reading to divine information about his clients, a trade he has been practicing for 25 years. His skills at seeing the unseeable, he says, were apparent from childhood.

“You're either born with it or you inherit it, but to say you can learn it is humbug,” he said while seated in a room filled with burning candles and religious icons, a cigarette dangling from his mouth.

A history of the Roma

Sztojka is a member of Hungary's large Roma minority, which some estimates place at as many as 1 million people in the Central European country — roughly 10% of its population. Present in virtually every country in Europe, many Roma face racism, segregation, social exclusion and poverty.

It’s terribly important to preserve our culture and traditions, because if we don’t have a culture, then the Gypsy community will cease to exist.

First migrating to Hungary in the 15th century, Roma were known historically for their skills as craftspeople and musicians. They long spoke their own language and maintained numerous dialects and customs related to their trades — metalworkers, horse grooms and traders, musicians and fortunetellers, among others.

But in the mid-18th century, Habsburg empress Maria Theresa ordered the forced assimilation of the Roma, outlawing their nomadic way of life and the use of their language, Romani.

Roma children were removed from their homes and placed with non-Roma families, while use of the Hungarian word for Roma — cigany — was also forbidden. They were dubbed “New Hungarians.”

This and other processes of marginalisation means that most Roma in Hungary are no longer able to speak the Romani language, and many of their traditional trades — like fortunetelling — were lost, said Szilvia Szenasi, director of the Uccu Roma Informal Educational Foundation.

“Traditional occupations are very much on the wane,” Szenasi said. “It is important to preserve them for the next generation, because it is through them that the Roma people can live their own identity.”

For Sztojka, preserving Roma culture goes beyond keeping the centuries-old art of fortunetelling alive. He dresses each day in brilliantly coloured vests and shirts adorned with floral folk patterns, and wears a traditional long, dark moustache.

A devout Catholic, he only removes his wide-brimmed hat — a trademark of the Gabor Roma clan of Transylvania — when eating or attending church.

“It’s terribly important to preserve our culture and traditions, because if we don’t have a culture, then the Gypsy community will cease to exist," he said. “I try to pass them on to many people so they can really get to know us, because all they know is that there are Gypsies, but they don’t know anything about us."

While in several cultures the word Gypsy is considered an offensive term, Sztojka prefers using it to Roma.

He and his family belong to the Lovari subgroup of Roma people, and speak the Lovari dialect of Romani — something he says is “on the verge of extinction.”

“People don't really want to speak the Gypsy language. Everyone assimilates as if suddenly they wanted to be Hungarian,” he said.

Along with his clairvoyance, Sztojka inherited his 150-year-old tarot cards from his great-great-grandmother, who herself was a fortuneteller in a time when the tradition was a much greater part of Roma identity.

Beatrix Kolompar, one of Sztojka's relatives, said that her people's traditions “can distinguish us as Gypsies, as Roma.”

“Since we don’t have a country of our own, we carry on the world we live in, the Roma way of life, through our traditions,” she said. "The dancing girls, the colourful dresses, the fortunetelling and the fortuneteller, it’s proof of who we are.”

But Szenasi, the director of the Uccu Foundation, says that preserving such traditions "requires cultural recognition, which is very lacking in Hungary.”

Without “institutional culture” such as museums and other cultural institutions, she said, "the traditions that the Gypsy people are doing are slowly becoming lost, and these values will unfortunately disappear.”

Sztojka says he has lost around half of his business during the COVID-19 pandemic, but that many of his “patients” are return visitors who are convinced of his clairvoyance.

Sztojka makes his living from fortunetelling, charging 15,000 Hungarian forints ($50) per session, although he says he doesn’t turn poor people away. But he also considers it “a mission” that spiritually enriches both him and his customers.

“To read cards is a total blessing for me. It’s how I can help my fellow human beings," he said.

Despite the vanishing of his culture's centuries-old way of life, “Zoli with the hat” says he will never give up on carrying forward the mystical trade of his ancestors.

“I believe that I was born a Gypsy, and I will die a Gypsy.”