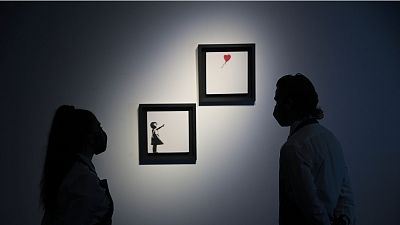 A two-part version of Banksy's "Girl With Balloon" painting is expected to sell for as much as €4.1 million.

It will go under the hammer for the first time at a Christie's auction in London later this month.

The rare edition, one of 25 created by the elusive British street artist in 2005, features a young girl in one painting and her heart-shaped balloon in another.

"It's a pretty signature image for Banksy in that he did the first iteration of it on the streets," Katharine Arnold, co-head of Post-War and Contemporary Art for Christie's in Europe, told Reuters as the artwork went on display at the auction house's London showrooms on Friday.

Origins of The Girl With Balloon

Bansky's landmark piece was first spotted in 2002, under Waterloo Bridge in Southbank, London. It wasn't long until another appeared in Shoreditch, a little further east.

Several companion pieces and replicas have been produced by the artist since that often align with political messaging. One image depicts a girl floating upwards using a series of balloons was planted on the Palestinian side of the West Bank wall in Israel.

In 2017, the artist emblazoned the balloon with a Union Jack and offered a free print to those in opposition to the UK's Conservative government in the run up to their third election win in 10 years.

Banksy achieved notoriety and disruption in the UK art scene in the early 2000s for his graffiti - and later - installation pieces, such as the 2016 pop-up theme park Dismaland, which contained extensive sculptural critiques of topics like meat production, celebrity culture, and immigration.

He spent the majority of the 1990s confined to his hometown of Bristol, achieving some credibility for his freehand street art of a local level.

The introduction of stencils, like the ones used to create The Girl With Balloon, lead him to wider cross-continental notoriety in the early 2000s. It is, arguably, his best known work.

He remains anonymous despite a number of plausible theories debating his existence. It is now estimated the anonymous artist is worth €46.5 million.

But what does it mean?

"There are some iterations of this where you see the little girl with the balloon in the tiny little format of a single canvas," Arnold said.

"Here...the balloon is already flown away into a second canvas. And of course, that means that she's forever separated from her little heart balloon that she's hankering after."

The diptych has been in the hands of a private UK collector since 2013. It is the first of its kind to go on sale at Christie's, where it seen fetching a minimum of €2.9 million in the process.

"It's an image that really is about hope and aspiration, which after the last 18 months that we've gone through is something that we all need more than ever," Arnold said.

The Girl With Balloon diptych will be part of Christie's "20th/21st Century: Evening Sale Including Thinking Italian" held in London on October 15.