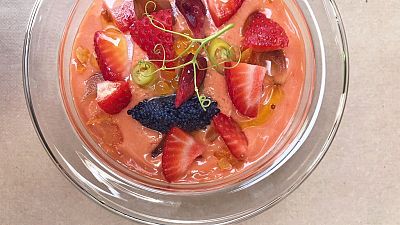 Roberto Terradillos is chef patron of Spanish restaurant TERRA PALENCIA, selected for a Bib Gourmand by the Michelin Guide 2021 and a sun by the Repsol Guide 2021.

Tomatoes were introduced to the Old World by Columbus. Salmorejo was not known under that name until some time after that, when we started to "cook" with them around the 18th century.

Since then, like other traditional Spanish recipes, Salmorejo has always had a place in most Spanish homes, especially during the hot summer months. This cold soup does not require great technical skill, but it requires a very precise point of seasoning so that the flavour is well balanced. Look after that.

Cooking time: 5 minutes of preparation + 1 hour of macerating (though it is at its best the next day)

Pair it with: White wine, made from Verdejo grapes in the Rueda region of Spain. I like K-Naia or Verdeal.

This is the recipe of my grandmother Cata, who's an extraordinary cook. Her version is more like Gazpacho (a similar but less thick mixture). She substitutes the bread (usually used in Salmorejo) for red pepper bell and dresses the soup with a few drops of vinegar. It is one of those dishes that, thinking back, she has always prepared in the summertime of the year.

Ever since he was a child, seeing the jar of Salmorejo on the table at her house meant that summer was coming, the good weather... and that the school year was over.

The success of the preparation is guaranteed if good tomatoes are selected, and at my grandmother Cata's house, thanks to a neighbour, there were always good tomatoes in season, which made the recipe just perfect.

Salmorejo is originally from Cordoba, Andalucia, a city famous for its hot and arid summers. Its origin dates back to the 19th century when food was pounded with stones. Salmorejo's ancestor is believed to be Mazamorra, a staple food for Roman troops. Over time, Salmorejo also became a hit with pickers in the olive groves of Andalusia, southern Spain.

My inspiration for this variation of the recipe was to look for a flavour to enhance the tomato, in this case: the red fruits, which are also enhanced by the sugary beets. I really like its texture, and it is very easy to achieve if we have a temperature-controlled mixer, blender, or similar, at home. Mixing it at 60º allows us to achieve pasteurization, thus extending its shelf life.

Salmorejo is perfect as an appetizer, and garnishing it with some salted trout or sardine gives it a perfect salty nuance.