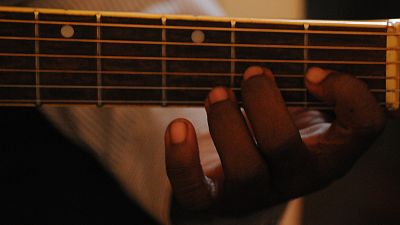 Meet the African musicians who bring our Cry Like a Boy podcast to life with their fusion of Afro beats, pop and jazz.   -   Copyright  Valéria Rodrigues Valéria via Pixabay
By Pascale Davies  •  Updated: 07/10/2021

Our original Cry Like a Boy podcast series took you on a journey across Africa on a voyage stretching from Senegal to Burundi. This podcast highlights stories on how men challenge the notion of masculinity and fight for gender equality on the continent.

In listening to these gripping tales, you will have also heard the smooth musical tones or the strong catchy beat of the local artists we featured.

Here are the five musicians that brought the Cry Like a Boy podcast to life.

This Burundian musician fills your ears with dulcet tones and poetic songs. But behind the tranquil tunes lies a strong message.

“I’m a musician to be useful to society,” the musician tells Euronews.

Burundi is one of the world’s poorest countries and faces high food insecurity levels and a government clampdown on its opponents. For men, the pressure is on them to build a house and father a son.

The melodic songs, which made Kami somewhat of a local star, tell a story of a man who wants a better future for his country. And that means more rights for women.

He wants to become one of the drivers of change through his lyrics. Burundi's past and present are his main inspiration.

“My genre of music is Afro-blues and I try to mix Burundian drums with modern music.”

Burundian drums are a crucial part of the country’s heritage and were a symbol of power during the monarch and were used for special announcements and royal events.

Yves Kami's music is featured in the first two episodes of the podcast Cry Like a Boy on the Abatangamuco, a group of men who one day decided they had to stop abusing their wives and are now promoting a gender equality revolution in Burundi.

This group of African artists embodies the colourful scene in Senegal and is bound to get you up on your feet.

Singer-guitarist Sahad Sarr has put together a true patchwork of afro-fusion musicians with West African rhythms that also includes an uplifting brass section.

The group is a part of the tradition of young musicians who breathe new energy into African music. Their sound is a crossroads between Malian blues, jazz, Afrobeat and rock.

As for the lyrics, Sahad sings in multiple languages that emphasise humanity and share a message of love and tolerance.

The music and the message fuse perfectly with the Cry Like a Boy podcast episode on the challenges facing gay men in Senegal, where they are shamed for being homosexual.

The deep tones of Lesotho singer and songwriter Selimo Thabane will not fail to soothe your spirit. But paired with Jazz and Bob Marley notes it makes for a unique sound.

He also sings in Sotho, the language spoken primarily by the Basotho people in Lesotho and has created a unique genre of “Mangae Jazz”, which is a mix of Basotho traditional music, called Mangae and combined with jazz.

Thabane was born in the mountain kingdom of Lesotho and has become somewhat of a star in his country.

His music, which at times sounds pessimistic, but is broken up with more cheerful jazz, is the ultimate accompaniment to the Cry LIke a Boy podcast about the men in Lesotho who risk everything to dig for gold in clandestine and dangerous mines.

The sound of this Guinean band made up of five members has been described as "West Africa meets Jimi Hendrix". But it of course has an African twist and is steeped in tradition.

Two members play the Kora harp, an impressive 21 string West African instrument, which combines the lute and harp features. But the instrument has been electronically enhanced and can imitate fast guitar tappings and allows for the Hendrix-style riffs.

This combined with two percussion musicians and a bass guitar makes for an impressive sound with fast solos.

The group was formed in 1999, with three members, and has been taking its music around the world. In 2007, the band toured the UK with Nigerian superstar Femi Kuti.

Ba Cissoko's music was used in the Cry Like a Boy podcast episode on African migrants’ struggle to get across Europe.

This Afro-pop singer from Liberia combines Afro beats with a more contemporary and dancy sound.

The Liberian uses her soulful voice as a way to heal and empower. She says as a survivor of sexual violence, she has struggled with her mental health but has used music as an escape.

She believes music in West Africa is a powerful medium to bring people together and her song ‘Africa Fight’ is to bring awareness to the coronavirus pandemic and give information on how to avoid catching COVID-19.

She has also previously campaigned during the Ebola epidemic.

But the young singer’s talents are not just limited to her music. She is also an aspiring fashion designer.

Cry Like a Boy is an original Euronews series and podcast that explores how the pressure to be ‘a man’ can harm families and entire societies. Stay with us as we travel across the African continent to meet men who are defying centuries-old gender stereotypes and redefining their roles as men.

You can discover the series here.