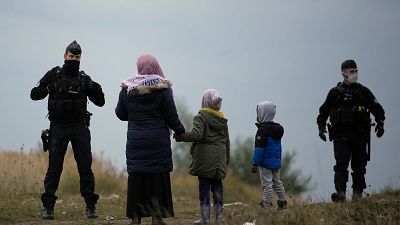 “Do you know Snollebollekes?” asked a Dutch journalist, interviewing Ethiopian-born Dutch runner Sifan Hassan straight after she won gold at the Tokyo Olympics in the 5,000 metres.

The runner admitted she hadn’t heard of the Dutch group, whose music played during her victory lap.

Hassan had just won the Netherlands its first gold medal in athletics for 29 years. Like other team members, she wrapped herself in the national flag and stood on the podium in an orange tracksuit.

But still, the Dutch journalist felt the need to test her cultural knowledge, and back home, it was her response that dominated the debate.

The song played in Tokyo was “Links, Rechts” (left, right), by the group Snollebollekes. The lyrics are hardly in-depth, urging people to jump left to right, preferably while holding a beer, but the party favourite has totalled some 27.5 million plays on Spotify.

Hassan’s post-race interview went up on the website of the widely read Dutch newspaper Algemeen Dagblad, or AD with the headline: “Sifan Hassan after winning gold: ‘Snollebollekes? No, I don’t know them’”.

Only after this prompted a furore did the newspaper replace it with a more typical sporting headline: “Hassan after race gold: ‘I need to see the medal to believe it.’

Hassan had waited five years to finally get her Dutch passport in 2013. Two days later, she claimed her first Dutch running title with a time that enabled her to qualify for the European Athletics Championships.

Dutch newspaper Trouw reported that Hassan wanted to show the spectators she was “worthy of her new passport”.

“It gave me extra power,” she told the paper while wearing a gold medal around her neck and clutching a piece of Edam cheese and a wooden clog, both symbols of the Netherlands.

Many foreign-born athletes like Hassan face such additional pressure to excel.

“That’s something we can see in all minorities in terms of power relations. They have to make an extra effort to show that they are good at what they do. They feel like they need to constantly prove themselves to be seen as equals to others.”

The controversy over Hassan and the Snollebollekes is far from an exception. Many athletes face such stigmatisation and questions over whether they are “worthy” of their new nationality and country.

And this phenomenon isn’t limited to sports stars.

From anonymous migrant to national hero

Much like top athletes, a lucky few migrants do gain whole-hearted public support -- if they accomplish incredible feats or risk their lives for others.

That’s how Alioune Diop landed himself a flat and job security.

On July 6th, 2018, the 42-year-old Spaniard originally from Senegal was working as a security guard at a building that housed people in need, including migrants, in Lyon in southeastern France.

As he reached his workplace on that summer day, Diop saw a crowd and police cars. Then he spotted a resident on a window ledge on the 7th floor, inches away from jumping to certain death.

Diop raced up the stairs and tried to talk down the man, a 27-year-old Afghan who lived in the building.

Diop knew him and with another resident translating for him, he begged the man not to jump.

“I told him life’s too long, there’s something out there for him”, Diop recalls.

After talking him out of jumping, Diop managed to grab the young man. He struggled to stop him hurling himself back over the ledge but got him to safety.

When news of his heroic act broke in local media, Diop saw his life change for the better.

He was given a medal by the city mayor and offered a permanent contract by the security company where he still works. He was also rewarded with a flat, courtesy of Habitat & Humanisme, the organization that runs the building where he works, which helps at-risk people find housing and reintegrate into society.

Today, the memory of his action still lives on.

“Since I saved the Afghan, I’m still the same guy. but when people hear that I’m the one who did it, they congratulate me,” Diop says, laughing.

His story is happier than that of another African migrant who risked his life to save another person.

Mamoudou Gassama was nicknamed the “Malian Spiderman” after he was filmed in Paris in May 2018 scaling a block of flats with his bare hands to save a 4-year-old boy who was dangling from a fourth-floor balcony.

Gassama became a hero, meeting athletes and celebrities. He was even presented with the BET Humanitarian Award, a US trophy usually given to African Americans.

The “Malian Spiderman” got his residency permit, followed by a French passport as well as a job at the extremely prestigious Paris Fire Brigade, the largest fire fighting unit in Europe.

But his period of good fortune was short-lived.

In an August 2021 article, French newspaper Le Parisien tracked down Gassama to find out what had become of him.

It turned out that after joining the firefighters at his request, he wasn’t able to complete his training.

“He didn’t meet all the requirements to join the Brigade, he does not have a middle school-leaving certificate and suffers from a pathology incompatible with the profession”, a Paris Fire Brigade spokesperson told the French daily.

In three years, Gassama has gone from national hero back to anonymity. He says he has been almost kicked out of his flat and struggles with unemployment and low-paid odd jobs.

Integration is a daily challenge in which immigrants are still far from equal.

In France, immigrants make up 10% of the workforce, but their unemployment rate -- 16.4% of women and 14.3% of men in 2018, according to Insee, the National Institute of Statistics and Economic Studies -- is twice that of the native-born population.

And this situation isn’t limited to France. The German Federal Employment Agency (BA) reported this year that around 14% of foreigners were unemployed. In Spain, that figure neared 24% in the second quarter of 2021, according to National Statistics Institute (INE) data.

“They are in the blind spot of the whole migration, despite being the biggest category. The migration policies don’t look at them,” says Thomas Liebig, a German migration specialist at the Organization for Economic Co-operation and Development (OECD).

In a Policy Debate brief published in November 2020 co-authored by Liebig, OECD research found that female migrants are at a “double disadvantage”, with lower employment rates than both foreign-born men and native-born women.

Integration policies developed in the past are partly at fault, Liebeig says, since they failed to focus on migrant women’s needs.

“When women come as part of a family reunification -- which accounts for a lot of the arrivals of women -- the condition is that the husband is working and that he earns enough to support the family without social benefits,” he said.

Women are therefore less likely to benefit from integration programmes than men.

Since women make up the majority of those migrating to join family rather than take up a job or education, they “have less prior attachment to the labour market than other groups of migrants”, the OECD research found.

Previously implemented policies focused on supporting migrants on arrival rather than looking at women’s longer-term needs and helping those who started families.

And with migrant women less likely to use childcare than their native-born counterparts, (as a result of cost and lower availability, an EU Labour Force Survey found), the difference in their employment access is striking.

Migrant women with a child under the age of 6 have a much lower employment rate (46% in 2018) compared to native-born women with young children (64% to 69%), according to the OECD’s November 2020 Policy Debate brief.

“The integration programmes for them should be when they are ready. When their children are 5 to 6 years old, they are willing to join it. We need policies that account for the family’s reality,” advocates Liebig.

The OECD migration specialist isn’t the only one to have noticed a disparity between the needs of migrant women and what’s being offered to them.

Just north of Paris, in Seine Saint-Denis, an urban area with the highest number of immigrants in France, Adjera Lakehal-Brafman knows this only too well.

Since she started working at the Women’s Association in the district of Franc-Moisin in the mid-80s, Lakehal-Brafman, now director of the organization, has witnessed firsthand the difficulties migrant women face with adaptation.

“How can you go to the job centre when you don’t know the language? You can’t!”, she insists.

The Franc-Moisin Women’s Association helps newcomers in their integration by offering a French language course.

“Language classes are a gateway to social and professional integration,” says Lakehal-Brafman.

In the past, women mainly came to the classes wanting to be able to supervise their children’s school work, she recalls. Now, they are also motivated by the desire to get a job.

With stronger language skills, migrant women become much more independent and are better able to understand which social services they can access, she says.

This is especially important as services are provided more and more online, she adds.

“The digital divide is a challenge. People are asked to go online. And when you don’t understand the language or the digital tools, it’s really hard.”

Seeing that access to childcare was a major challenge for migrant women and prevented many from accessing language classes, the Franc-Moisin Women’s Association set up its own day-care centre on its premises.

“Women with children from 4 months old to 3 years old can leave them with the early childhood professional and attend the classes,” says Lakehal-Brafman.

“Solutions do exist. You just need the will to implement them.”

“If they (women) get beyond the basic language and the basic skills, it is a huge boost in the integration. In economic terms, there is a much higher return.”

But Lakehal-Brafman complains of a shortage of similar language programmes, stressing that such initiatives should not depend on local activists .

“We can improve dialogue through linguistic projects,” she says.

Julie Kleinman, an urban anthropologist who has studied West African migrants living in France, also stressed the importance for such people of developing social networks.

“By creating and widening their social networks [...], they are able to find jobs, in some cases, through these connections, jobs that they wouldn't have been able to find otherwise,” Kleinman said in May 2021.

“These have become a huge resource for them.”

Fellow researcher Wyszynski, who has studied perceptions of immigrants in Germany, says it is also essential to rethink the state assistance provided to migrants, encouraging them to gain greater autonomy instead of assuming that they will live in a state of dependency.

Currently, support “doesn’t give them the tools to fix the problems themselves”, says the Aga Khan Development Network researcher.

“Many people I met want to integrate and make a hard effort to learn the language, but integration also comes from the other side,” she says.

“We need to deconstruct our stereotypes.”

This story was edited by Anna Malpas.

We must protect children on Europe’s borders | View