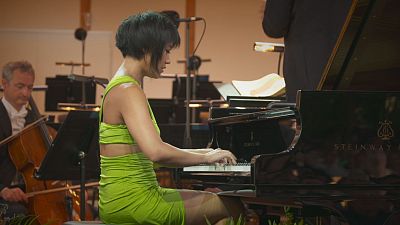 In the Dzintari Concert Hall and accompanied by the waves of the Baltic Sea, Wang interprets Mozart's piano concerto (No 20) in D minor, K. 466, one of his darker masterpieces considered restless, gloomy and dramatic.

It's these later Mozart concertos that conductor Gardiner describes as "imbued with the theatricality and the dramatic contrast between the very, very silvery sound of the piano, like a prima donna, she's a sort of soprano and then the orchestra, which is the big bang effect."

Wang gets the balance of the prima donna piano role perfectly. She tells us that as there's "so much turbulence from the tutti I chose to come in very inner, very dolce, very singing."

Getting the original tone

When Mozart created his music he did so on the fortepiano, which is much smaller and lighter than today's modern concert pianos. This is why Gardiner challenged Wang to not use the pedal, to resemble the fortepiano better. The pedal can be used to add colour to the music, but Wang had to really articulate her performance. "It's a different way of playing", it's like the piano is singing, she adds.

Wang says that this particular Mozart concerto was written on the 10th of February in 1785. When she found this out she thought it was spooky. It might also explain why she plays it so well, there's perhaps an affinity there as it was made on the same day she was born.

Wang was not only accompanied by the changing tides of the Baltic Sea, but by the amazing Mariss Jansons Festival Orchestra. This special orchestra includes musicians from the Bavarian Radio Symphony Orchestra, the Berlin Philharmonic, the Concertgebouworkest, the Oslo Philharmonic, the Tonhalle Zurich and the Vienna Philharmonic Orchestra. It was created after the talented conductor, Mariss Jansons, died to honour his dream to bring together musicians from the orchestras to which he felt the greatest affinity.

Many of the members of this orchestra admired Mariss Jansons and his great work. They also played extensively with him and considered him a friend.

A time for reflection

Outside of the concert hall, Wang was able to enjoy the beach.

The beach at Jurmala is what she describes as a paradise to her. It's what she didn't have in New York, the city she has called home for the last 15 months and during the pandemic.

Like many, the pandemic has been a time of reflection for the talented pianist. She has realised that what's important in life is "who you are with and how much you are putting yourself into it to enjoy and how centred you are as a person."

This third edition of the Riga Jurmala Music Festival is taking place over four weekends throughout the summer. The last performance is on the 5th of September.