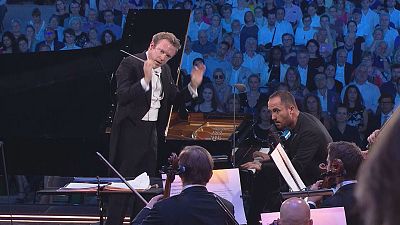 The Vienna Philharmonic's Summer Night Concert is one of the biggest highlights of the musical calendar. The annual open-air performance takes place in Vienna's iconic Schönbrunn Palace.

It's a time for the audience to enjoy the unique sound of the Vienna Philharmonic with its talented musicians, atypical instruments and heritage, whilst basking in the truly unique surroundings of the palace's baroque park.

All the tickets for Summer Night Concert 2021 were allocated to medical professionals working on the front lines during the pandemic and people involved in elementary education as a special thank you for all their hard work.

The main theme was a musical journey around the world. Daniel Harding, the conductor, tells us that "after a year when everyone was really limited in their ability to travel and to visit other countries, to have different experiences, we used the music to remind us how beautiful it is".

The programme was comprised of music from composers from all over Europe, the US and Russia. Harding even says they went "beyond our planet".

"Thanks to Gustav Holst we go to Jupiter, who is described as the bringer of jollity," he adds.

The performance was marked by the Russian-German pianist, Igor Levit, playing 'Rhapsody on a Theme of Paganini' by Sergei Rachmaninov.

Levit describes the piece as having "humorous places here and there but it is rather grim".

He explains that "we all know the very famous 18th variation which is very loving and daring and emotional, but altogether the piece is witty but not in a funny sense and more on the grim side".

Schönbrunn Palace, where the concert took place, was commissioned by Emperor Leopold I at the end of the seventeenth century. The building was intended as an imperial hunting lodge for his son, Crown Prince Joseph, who later became Emperor Joseph I. It was built on the old Château de Plaisance.

It was only in the 18th century, under the reign of Maria Theresa, that it became an imperial residence and hosted European statesmen.

In 1996, Schönbrunn Palace became one of UNESCO's World Cultural Heritage Sites. The site is one of Austria's top tourist destinations. Millions of visitors come to look at its unique baroque style every year.

The Vienna Philharmonic was founded in 1842. It's based in the Musikverein and its members are selected from the Vienna State Opera orchestra. Some of the group's renowned conductors include Otto Dessoff, Hans Richter, Gustav Mahler, Joseph Hellmesberger Jr and Richard Strauss.

This process ensures that only the best are accepted, maintaining the Philharmonic's high standards. One of the highlights of the orchestra is the unique sound that it has kept since its conception.

Daniel Froschauer, the chairman of the Vienna Philharmonic orchestra describes it in this simple way:

"If you played in our orchestra in 1875 at the opera house you played with Guiseppe Verdi Aida, you played the Twilight of Gods with Richard Wagner. We premiered Brahms' symphony, Mahler, Gustav Mahler was our opera director so you see all these names they form and shape our sound and this sound is in our collective memory and it is passed on from generation to generation."

Harding loves conducting the musicians. "Like a great car, they are a dangerous orchestra to drive because they will react instantly to everything you do", he explains. "If you can get it right and you can dance with them in a way that works they will give you the world and if you get it wrong it’s a dangerous beast."

A Strauss waltz ended the concert this year. After a long musical voyage, it was a return to Vienna and home.

My longing is for home and the people I really love

As Levit says "nobody came out of this year no wounded", so travelling and escaping with music is much needed for some. But there's no place quite like home, especially when that home is the Vienna Philharmonic.