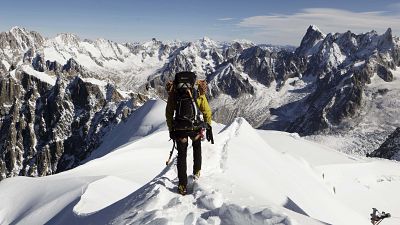 Anyone hitting the ski slopes in France this weekend might want to pack a pair of shorts alongside their socks and salopettes.

France is experiencing one of its mildest Februarys ever recorded. Low-lying resorts in the Pyrenees could see top temperatures of 15°C on Sunday.

Last weekend, one resort in France came under fire for using helicopters to move snow from higher areas to balding, green slopes further down.

It has all brought into sharper focus how ski resorts — which heavily rely on February half term revenues — are going to cope with climate change.

Global warming is even more acute in mountain ranges. Temperatures in the Alps have risen by 2°C over the course of the 20th century, according to the Research Centre for Alpine Ecosystems, higher than the 1.4°C average for the whole of France.

The seasons are getting shorter: A study by the University of Neuchatel and the Institute for Snow and Avalanche Research estimated that Swiss ski resorts have lost over a month of snow coverage since 1970 with the season starting 12 days later and ending 25 days earlier.

How are ski resorts coping so far?

The increasing use of snow guns and artificial snow has so far allowed business to continue as usual in ski resorts.

In France, between 100 and 120 resorts are equipped with the means to produce artificial snow and they together account for 95% of the sector's revenues, Alexandre Maulin, President of Domaines Skiables de France, told Euronews.

Across the border, in Switzerland, the situation is very similar.

"We're starting to see stations that are up to 80% artificially snowed," Manu Broccard, from the Observatoire Vallaisan de Tourisme, told Euronews.

"So if we want to open the season in time for Christmas, we have to use snow guns," Broccard said. "Not opening for Christmas would be a financial disaster."

But this model has its limits.

The first one is ecological: snow guns require a lot of water and a lot of electricity to function; while the second is meteorological: artificial snow is produced by projecting water into the cold air which can only be achieved if the temperatures are at least below 5°C.

"Skiing won't disappear over the next 20 or 30 years thanks to snow guns but we're likely to start experiencing problems after," Broccard said.

Maulin echoed that: "Projections that have been made by scientists show that our model will still be the same in 2050 and that our activity will remain decent."

"We're working on decarbonisation our sector because the question we have to ask ourselves is where will be in 2100?" he asked.

The ski resorts most at risk are those at low or middle altitude — below 1,700 metres.

A report from the French Court of Audits released in 2018 found that in the Alps alone, more than 70% of resorts fall under that category.

It also noted that younger generations were less keen on skiing and thus recommended that resorts diversify their activities, not just in winter but all year round.

France is the third biggest ski destination in the world after the US and Austria. The sector injects some €9 billion euros annually into the economy and employs 120,000 people.

Not all resorts are equal, however. The northern Alps area counts 171 resorts but 53% of their combined €568.3 million in revenues is brought in but just 17 of them.

"We have been aware for a very long time that skiing cannot be the only economic activity [in our resorts]," said Joel Retailleau, from the National Association of Mayors of Mountain resorts.

"Over the past 15-20 years, quite a few mayors, perhaps those more impacted than others, have developed offers in their stations that are not just about skiing.

"In fact, nowadays, we describe ourselves as mountain resorts and not ski resorts," he added.

The problem, noted Maulin, is that contrary to winter, the rest of the year doesn't provide a one-fits-all model.

"We're all looking for additional activities to be less reliant on the winter season but in the summer, we haven't found the one activity that would allow every single resort to operate.

"There's a lot of research, ideas, development. We're only just starting the process and as there won't be just the one business model, this development will take some time, " he emphasised.

Expanding in the summer, fortunately, requires little investment as the crucial bit of infrastructure — lifts and cable cars — are already there.

"Our machines can take people from the bottom of the mountain to the top to enjoy the scenery," Broccard said.

This has opened up a host of perspectives with Swiss resorts now increasingly hosting cultural events including concerts and festivals but also opening up their hiking and biking trails to a wider audience.

"The arrival of the electric mountain bikes is changing the game a little bit. They're making our mountain ranges accessible not just to elite athletes or extreme sports enthusiasts, but to everyone," he argued.

There are also a lot of hydrotherapy projects in development.

'Return to the past'

"It's almost a return to the past (...). The first kind of tourism in the mountains, in Switzerland at least, wasn't ski, it was health tourism," Broccard continued.

"Summer is the best season to diversify into and our marketing must reflect that mountains equate health. We have to talk up the fresh air angle, the health angle and the outdoors side," Broccard continued.

Still, for now, these activities, whether in France or in Switzerland are just a fraction of what the ski season brings in.

What mayors want, Retailleau said, is financial and regulatory assistance to develop their activities away from snow and help to promote them. Overall, he added, "there's no major fear" that their local economy will be badly hit if they diversify.

"Mayors are confident in the future because they're certain they'll be able to offer plenty of activities alongside skiing," he concluded.