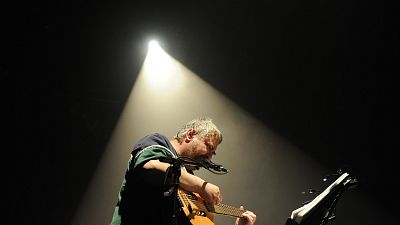 LOS ANGELES — Daniel Johnston, the eccentric singer-songwriter who was beloved by many fans in spite of — or even because of — his battles with mental health issues, has died at 58. His hometown newspaper, the Austin Chronicle, confirmed with Johnston's former manager, Jeff Tartakov, that the artist died of a heart attack Tuesday night.

Johnston released 17 albums and was revered by artists like Kurt Cobain, Tom Waits, the Flaming Lips, Sonic Youth and Yo La Tengo, many of whom who covered lo-fi songs that encompassed significant whimsy and great angst. He was the subject of a 2005 documentary, "The Devil and Daniel Johnston."

Called everything from an eccentric genius to a childlike loner, Johnston made his bones and his reputation for oblique, yet touching lyrics, yelping vocals and oddly contagious melodies with a handful of homemade cassettes — such as "More Songs of Pain," "Yip/Jump Music," and "Hi, How Are You" — and nearly 20 albums.

Tom Waits, Jad Fair and Yo La Tengo recorded his tunes, and made him famous. Nirvana's Kurt Cobain wore Johnston's art work on a T-shirt, and made him infamous. His own struggles with mental illness, however, made him vulnerable and gave Johnston some of his earliest press.

Johnston moved to Austin in the '80s, and made that city his artistic centre, setting up his own label there, Eternal Yip Eye Music, and even creating a "Hi, How Are You" Frog mural at Guadalupe & 21st Street, alongside Austin's famed The Drag.

Starting In 1988, and into the early '90s during the recording of his first studio produced albums, Johnston's mental health suffered, and he was diagnosed with schizophrenia.

While heading to a small music festival in Austin in 1990, he suffered a psychotic episode while his plane was in mid-flight — he actually removed the key from the ignition leaving the plane's pilot, his dad, to crash-land the plane. After this episode, Johnston was involuntarily committed to a mental hospital.

For all his troubles, however, Johnston maintained a level of artistic excellence and a signature, fuzzy sound, one that, by 1994 found him releasing albums such as "Fun" on a major label, Atlantic Records, beating out Elektra only because potential label mates Metallica were devil worshipers in his eyes.

Johnston eventually headed back to smaller, independent labels like Tim/Kerr and Jagjaguwar, better suited to release his intimate, non-commercial sounds. Yet, Johnston still maintained a rep as a lo-fi overlord, even releasing a "duets" album of sorts in 2004, the double-disc "The Late Great Daniel Johnston: Discovered Covered" where Beck, TV on the Radio, and Death Cab for Cutie made the most of his scattered songwriting.

In 2005, director Jeff Feuerzieg captured the musician's life and times for the documentary, "The Devil and Daniel Johnston," while Johnston released albums such as "The Electric Ghosts," "Is and Always Was" and "Space Ducks," his last released full album, well into the 2000s.

Johnston played his last major shows in 2017 via a five date mini-tour featuring backing from Wilco's Jeff Tweedy, Built to Spill, Modern Baseball and The Districts. In a New York Times profile, he denied believing that it would be his swan song. "Why would it be?" Johnston asked.

As the Times put it then, "the idea of him quitting the road isn't unreasonable. He has battled manic depression and schizophrenia most of his adult life, and in recent years endured multiple physical ailments, including diabetes, a kidney infection and hydrocephalus, a condition in which fluid on his brain caused him to frequently lose his balance.

"In the last year, his mental health also worsened. ... Mr. Johnston's psychiatric treatment has required extended stays at inpatient facilities, and although he now lives with some degree of independence, he requires considerable assistance."

Although he had moved closer to Houston, Johnston was a revered enough figure in Austin that the city had designated an annual "Hi, How Are You? Day" in his honor, on his birthday.

His final album during his lifetime was "Beam Me Up!" in 2010. Johnston told the Chronicle in 2018 that he had been working on a new album with Brian Beattie, as yet unreleased.

Why mental health campaigners use the words 'died by suicide'