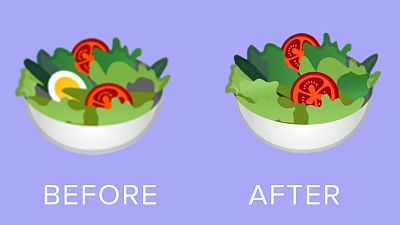 Everybody stop what you're doing. There's been a change to the salad emoji ... and the internet can't handle it.

Well, specifically, omnivores and carnivores on the internet.

In an attempt to be more inclusive to vegans and egg-haters everywhere, Google made a minor change to its salad emoji for select Android phones. Until recently, the emoji dish contained some leafy greens, sliced tomato and a hard-boiled egg.

But now, the egg has vanished!

One self-identifying carnivore claimed that the new egg-less emoji promotes unhealthy eating habits with its exclusion of the egg:

Another tweeted that to be "truly inclusive," Google would have to remove everything but the empty bowl for the sake of those allergic to tomatoes and those worried about E coli:

Others couldn't help but comment on folks' oversensitivity to such things as cartoon phone icons:

Or that it's simply becoming too "exhausting" to be inclusive via text:

Throughout the thread, countless tweeters questioned whether this was all a joke to begin with.

However, Daniel's rebuttal to the hundreds of disheveled commenters showed Google's intention was to create an emoji "more faithful to unicode's description. 'A bowl of healthy salad, containing lettuce, tomato, and other salad items such as cucumber.'"

To be fair, Daniel also announced Google had also done some work on its animal emojis.

We're just happy the turtle got a hug.

Prominent opposition figure on trial for criticism of Russian military