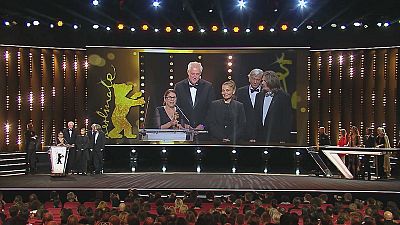 The bear hunt is over – in Berlin at least and the stars could relax. The Berlinale closed after 18 films of various genres had been screened in the international competition. They came under the critical eye of the jury led by the president Paul Verhoeven.

The 78-year-old Dutch director is known for several international blockbusters but also someone with an open mind.

“He is just a great film director and even though he made all those enormous Hollywood productions he is a independent mind, a real independent,” explained Dieter Kosslick, Director, Berlin International Film Festival to Euronews’ cultural reporter Wolfgang Spindler.

The Golden Bear for Best Film went to ‘On Body and Soul’ by Ildiko Enyedi.

The movie is an atmospheric love story which charts a slow-burning attraction between a man and a woman who work in a Hungarian slaughterhouse and discover they dream the same dream every night.

It was also voted Best Film by the Association of International Film Critics.

“It’s a very passionate film but if you do not enter our little labyrinth at the beginning you won’t see it, you will just see cold frozen, distant people in cold frozen surroundings,” the director told euronews.

It centers on a strongly independent and passionate singer, played by Véro Tshanda Beya who is forced to raise money for her son’s operation after he has an accident. The director said the movie shows the harsh realities of life in the Congolese capital of Kinshasa.

“The film, I think places the protagonists, the characters in a situation, unfortunately for those in the Congo in which infrastructure of the country has exploded – so, it is for all of us, the world in which we live without affection and lacking any make up,” he explained to euronews.

The Silver for Best Director went to Aki Kaurismäki for his film ‘The Other Side of Hope’.

Perhaps the director had got detained in the festival bar for too long for he was a little the worse for wear and so was unable to make it to the stage so the bear went to him.

The grand theme of ‘The Other Side of Hope’ is the refugee crisis in Europe and the bitter-sweet comedy centres on the unlikely friendship between a Syrian refugee and a low-rent Helsinki restaurant owner.

The film has a dry and grotesque sense of humour. It is Kaurismaki’s first feature film for six years.

Our review of Aki Kaurismäki’s THEOTHERSIDE OF HOPE, winner of the Silver Bear for Best Director #Berlinalehttps://t.co/0r75×3RnXSpic.twitter.com/3tjZ7OyDOK

Kim Min-hee won the Silver Bear for best actress for ‘On The Beach At Night Alone’.

She plays a young Korean actress who flees to Hamburg in Germany as she tries to get over her affair with a married movie maker. Working with the director was difficult developing the characterisation of the role, she told euronews.

“The role took a lot of energy and concentration to construct because the film director, Hong Sang-soo gave us the text on the morning of filming and we had to memorise it just before filming started.”

The Silver Bear for Best Actor went to Georg Friedrich for his role in ‘Bright Nights’.

“I still can’t grasp it, such important events like this take time to sink in,” he said after receiving the award.

In the movie, directed by Thomas Arslan the 50-year-old Austrian actor plays a father who struggles to reconnect with his teenage son on a road trip in Norway.

Over 400 films were shown in the various program sections and more than 335,000 tickets were sold during the 10 days of the international Film Festival in Berlin.

It's a wrap! Berlinale comes to a close with a 'surprise award-winner'