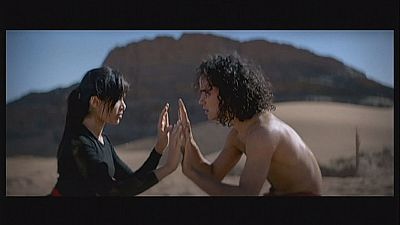 <p>The 30th Santa Barbara International Film Festival kicked off with the North American premiere of ‘Desert Dancer’, based on the life of Iranian dancer Afshin Ghaffarian.</p> <p>Set in Iran, the film follows the story of the self-taught dancer, who risked his life to live his dream despite a nationwide ban on dancing. In the volatile climate of the 2009 presidential election, Afshin and a group of friends decide to form an underground dance company.</p> <p>‘Desert Dancer’ is English film director Richard Raymond’s first feature film: </p> <p>“I get so many people writing me letters saying, ‘What you shot, I saw from my window.’ ‘What you said happened to Afshin happened to my friend, too.’ But one of the most surprising things is that I also get letters and e-mails from people – or see it on Twitter – people that are not living in Iran, that have been oppressed in different ways, whether it’s their family, whether it’s a financial situation, and they connect with the film as well,” said Raymond at the Santa Barbara premiere.</p> <p>‘Desert Dancer’ co-stars Indian actress <a href="http://en.wikipedia.org/wiki/Freida_Pinto" rel="external">Freida Pinto</a> as Afshin’s friend Elaheh. </p> <p>The young actress, who shot to global fame in the 2009 Oscar-winning movie ‘Slumdog Millionaire’, followed an intensive training schedule for the role that included eight hours of dance rehearsals every day. </p> <p>But, she says, the toughest training was in the mind: “Because I think when you have mirrors in a dance studio when you’re training, or when someone’s watching you, and you know you’re not a dancer, there’s a part of you that goes, ‘Oh my god they’re judging me, and oh my god I look so awful. And I have two left feet and dangly arms,’ and I feel the one year of preparation threw me out of that mindset, it pushed me to the limit, where I stopped judging myself and I said, ‘I don’t care’,” she said.</p> <p>Afshin Ghaffarian, who lives in Paris nowadays, has said that the movie is a <a href="http://reformancers.com/en/2014/08/25/discussion-with-afshin-ghaffarian/" rel="external">dramatised, fictional tale inspired by his life</a>, and that reality in Iran is much more complex than what is portrayed in the film. </p> <p>Already released in some European countries last year, ‘Desert Dancer’ is out in the United States this April.</p>